When Tech Stocks Do This, It Doesn't Bode Well

Tech was in the driver's seat for much of the past year. After an option-fueled blowoff in February, those stocks have treaded water, at best, while other parts of the market recover enough to trigger a nearly 80-year extreme in new highs.

This relative weakness in tech stocks has been enough to push the ratio between them and broader indexes nearly to the lowest level in a year. This does not often happen when indexes like the S&P 500 were sitting at all-time highs a few short days ago. 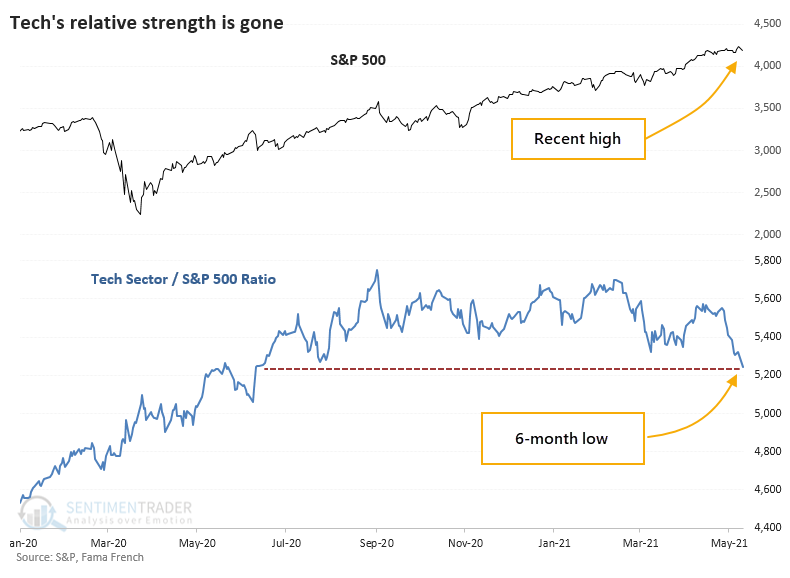 Whenever the S&P 500 had been at a 52-week high, then within 3 days, the ratio of Tech to the S&P fell to a 6-month low, the S&P showed weak short-term returns, but it didn't have much of a consistent impact beyond that.

The last two instances, in 2007 and 2013, didn't lead to anything nefarious. Before that, though, the last 6 signals all preceded short- to medium-term losses.

It tended to be worse for Technology stocks. Because of that, across almost all time frames, the ratio between the two was negative, and significantly so over the medium- to long-term. Over the past 30 years, there were only 2 exceptions when Tech managed to turn itself around from relative weakness and become a leader again. The others all failed.

The post titled When Tech Stocks Do This, It Doesn't Bode Well was originally published as on SentimenTrader.com on 2021-05-13.