Weekly Wrap for Jan 22 - More speculation, and a further recovery

The goal of the Weekly Wrap is to summarize our recent research. Some of it includes premium content (underlined links), but we're highlighting the key focus of the research for all. Sometimes there is a lot to digest, with this summary meant to highlight the highest conviction ideas we discussed. Tags will show any related symbols and time frames related to the research.

We entered the week once again with a surge in speculative activity. When we look at the raw number of contracts that small traders are buying, it's astounding. Parabolic is the only accurate term, with more than 22 million call options bought last week. Against those call options, they bought to open only 6.5 million puts. So, the net difference is even more extreme. 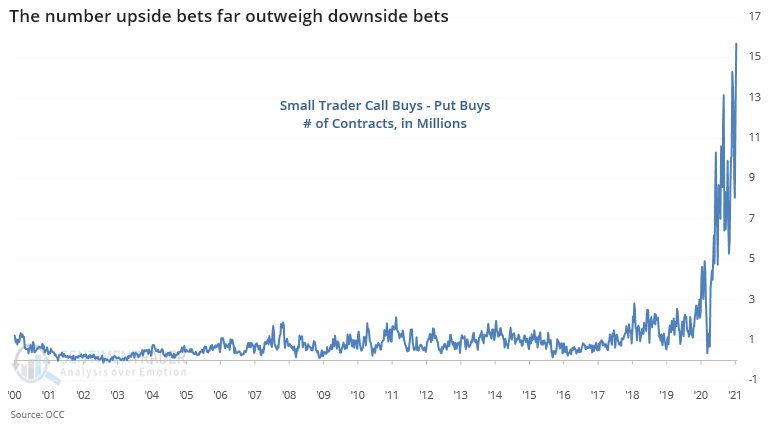 Someone has to take the other side of those call purchases and then hedge their exposure. Over the past 20 days, Gamma Exposure has reached a near-record, on an absolute and relative basis.  NOTE: The Gamma Exposure / Market Cap Ratio is now updated daily on the site. 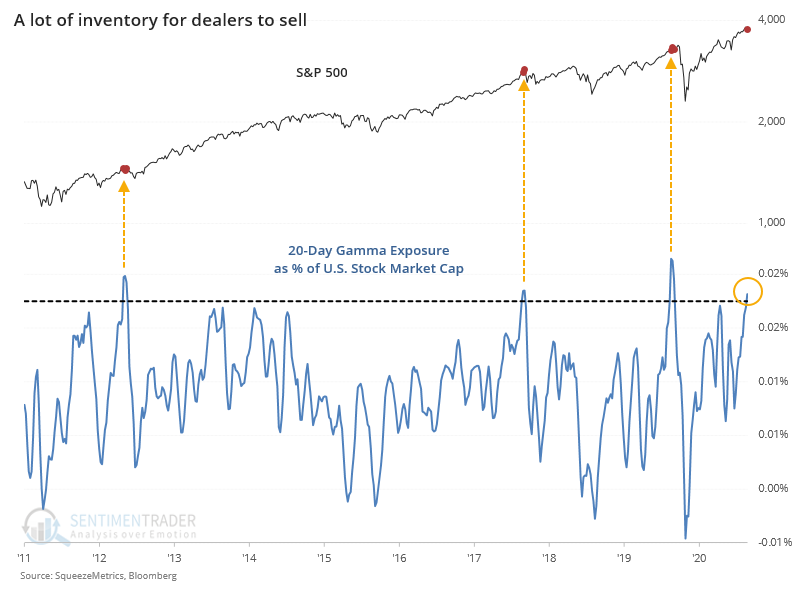 Wall Street analysts have joined the party as U.S. companies begin to report earnings in earnest. They've been busying upgrading price targets, and they've done it on so many stocks that it's registering an extreme. It's been tough for stocks to hold gains when analysts were expecting so much going in. 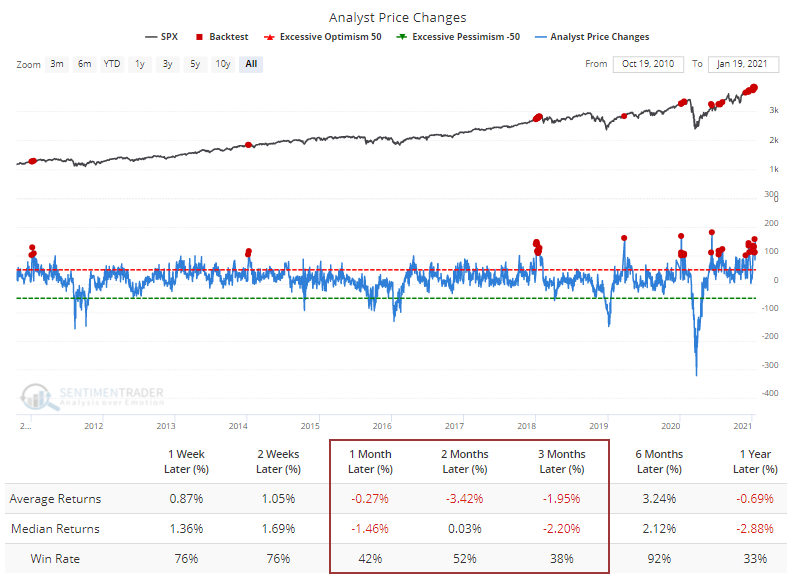 Fund managers in the monthly Bank of America survey, as well, are taking a record amount of risk. 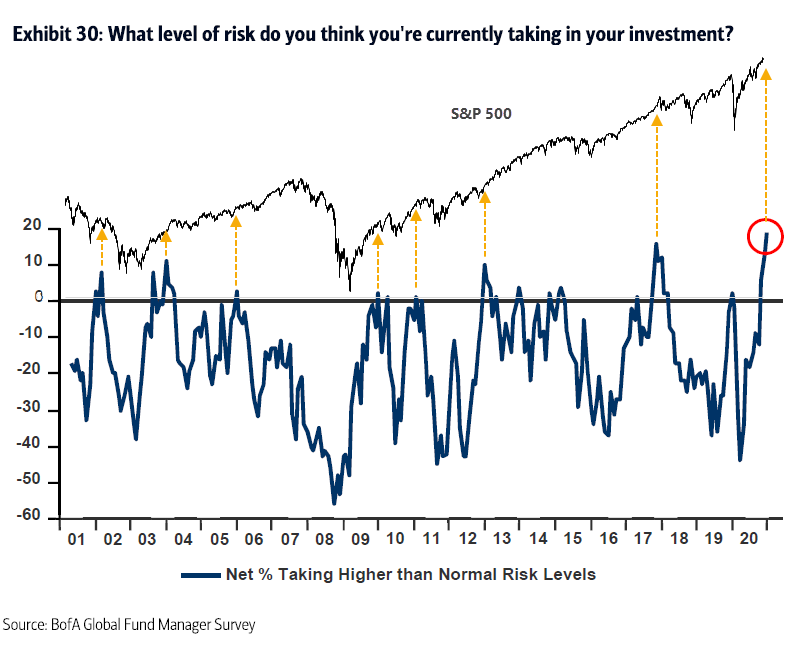 As has been the pattern lately, these extremes in sentiment have triggered as markets display the kinds of participation and momentum normally seen near the beginning of long-term uptrends, not the ends of them. Among the signs of recovery, not just in the U.S. but worldwide, is that for the first time in more than 200 days, fewer than 20% of major world equity indexes are in corrections.

After other streaks ended, it was a good longer-term sign for stocks. It was good for the S&P 500, and even better for small-cap and value stocks. 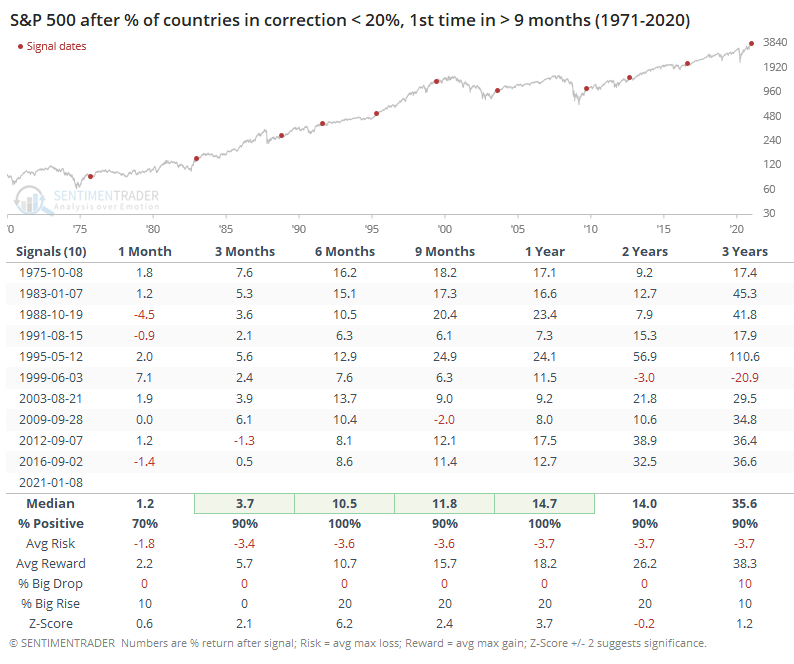 The persistent and broad-based recovery can also be seen in the percentage of securities on the NYSE that have been able to hold above their 200-day averages. Since 1928, this led to consistent gains over the medium-term.

He constructs a Risk-On Composite model by measuring the relative ratio range for 5 different ratios. The composite will range from 0 - 5 and issue a buy signal when it crosses a high level. We can see below that it's still in risk-on mode and far from giving a sell signal. 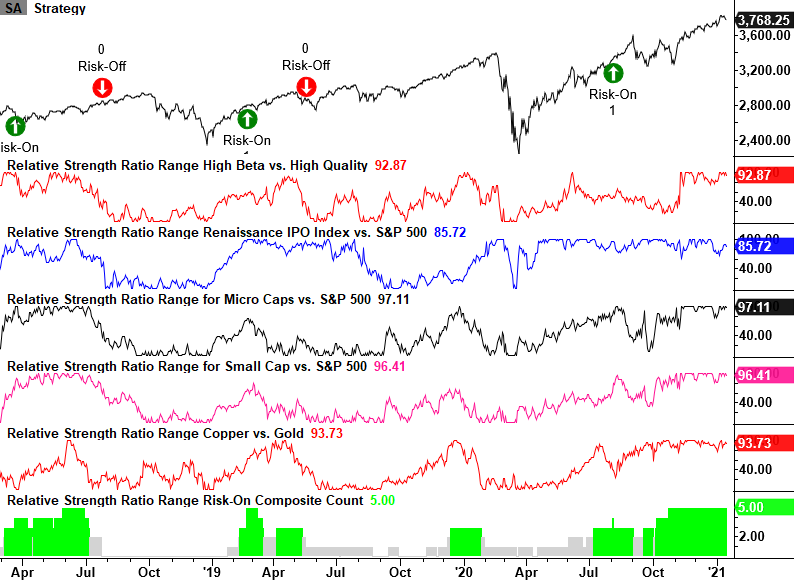 Dean also noted another risk-on or -off methodology to manage portfolio risk. The process seeks to identify a divergence between an index's underlying price and the internal participation amongst members as measured by a breadth composite.

It seeks to identify the 4 conditions that have consistently preceded deteriorating conditions as it did before the last two major corrections. So far, they're not triggering across a number of different indexes and market caps. 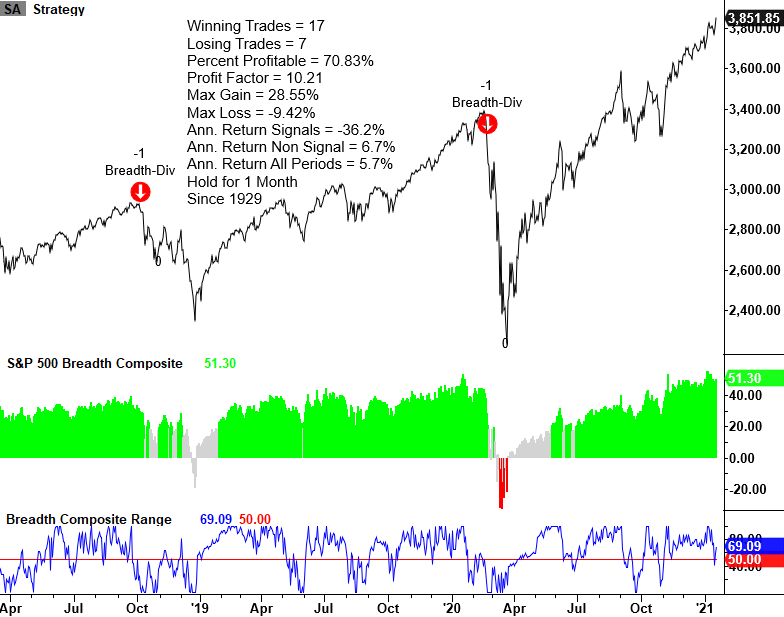 NOTE: We're working on integrating these models and signals into our regular updates.

However, we need to watch developments very closely, because just this week, the weakness in small-cap stocks and some bonds has helped to pressure the breadth metrics. We're seeing the very beginning of potential deterioration. 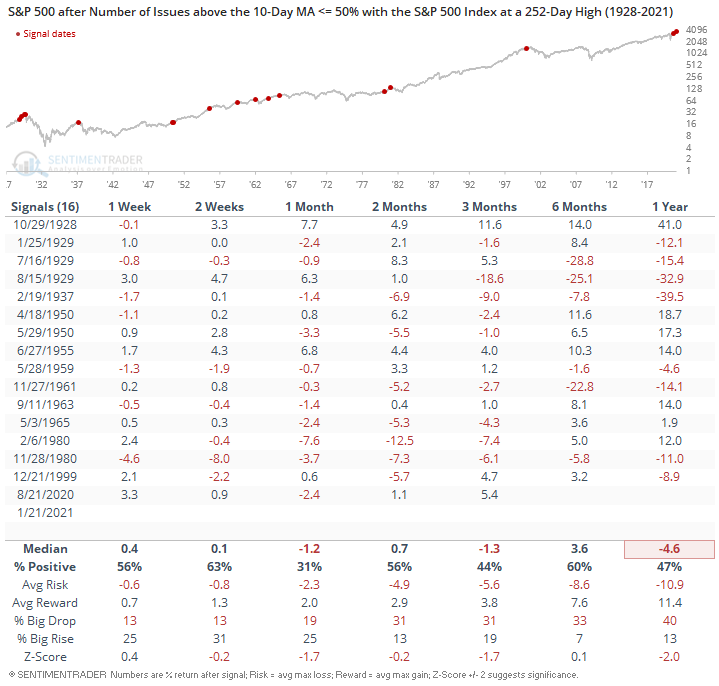 Jay pointed out that certain rivalries in the financial markets sort of take on a life of their own.

Large vs. small is one that a lot of investors pay close attention to. It is sort of the David vs. Goliath of the stock market. In the midst of this never-ending debate, smack dab in the middle lies a potentially significant opportunity that many investors rarely if ever consider – the mid-cap space. 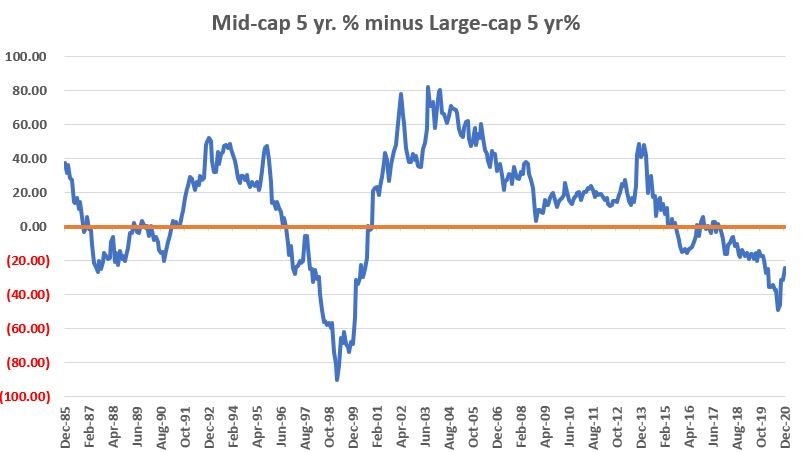 The WSJ pointed out that one of the few markets that has been struggling is investment-grade bonds. That certainly has been the case, as the 10-day average of the percentage of advancing bonds is just now trying to curl up from a very oversold condition. 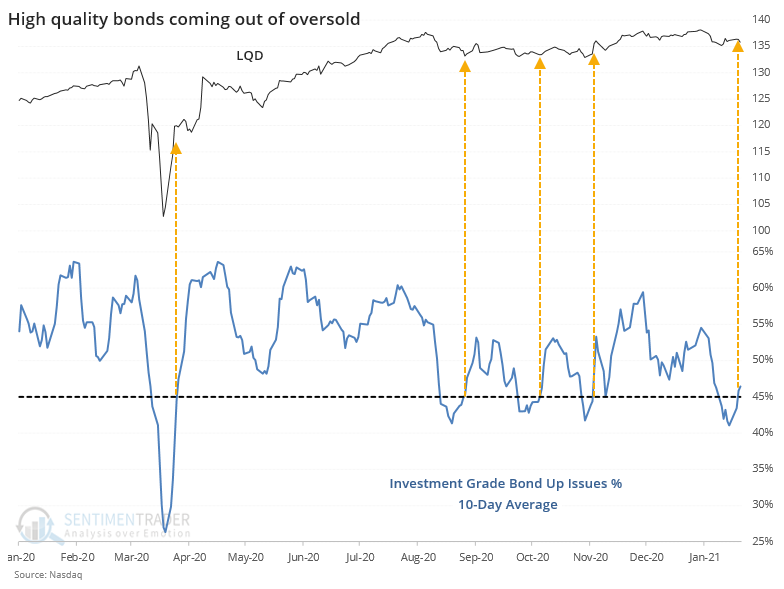 A recent reading near 40% is one of the lower ones in 15 years. The LQD fund did tend to rise going forward but its average return was a bit below average. The biggest positive was that these signals triggered when coming out of oversold conditions, so forward losses tended to be limited.

Last week, we saw more potential positives for energy and related stocks. Jay discussed a basic options strategy that can be a good way to capitalize on a directional bet without risking much capital. For those new to the options market, it's an excellent introduction.

The purpose of a stock replacement strategy is captured in the name – instead of buying shares of stock a trader buys a call option. Let's illustrate this with an example. As always, the trade example I am going to use is just that – an example – and NOT a "recommendation."

The energy sector has finally started to bounce back from its long downward trend of late. So, let's suppose a trader believes that the energy sector as a whole will advance between now and the end of April. The most straightforward approach would be to buy 100 shares of stock. At the time of publication, XLE (SDPR Energy ETF) was trading at $43.36 a share. So, to buy 100 shares of XLE a trader would put up $4,336. The risk "curve" for this position would be a straight line.

Now let's consider a stock replacement position. The trader expects a move by the end of April. April XLE options expire on April 16, so the next available expiration month is June. For the purposes of this strategy, we want to look for an in-the-money call option with a reasonable bid/ask spread. 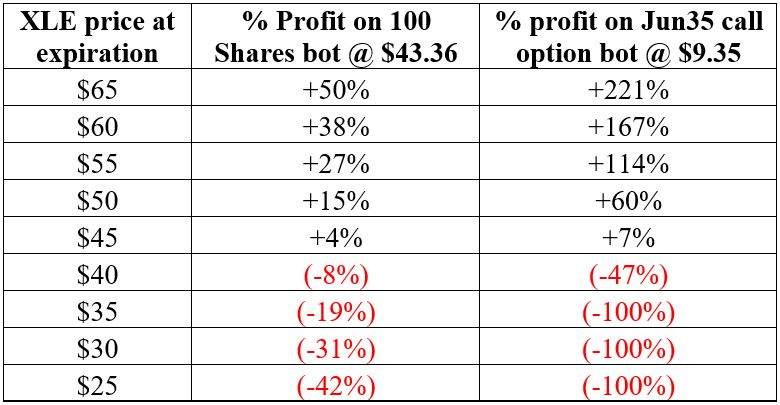 The primary advantage of the stock replacement strategy is that if done properly it:

The post titled Weekly Wrap for Jan 22 - More speculation, and a further recovery was originally published as on SentimenTrader.com on 2021-01-22.