A narrow yield curve has led to good returns in defensive sectors. By the time the spread between 2-year and 10-year Treasury yields got as low as it was in July, future returns in the dollar were muted to negative, leading to positive crude oil most of the time.

ETF flows in July show a preference for U.S. assets, especially bonds and tech stocks. Developed markets and metals have been shunned to a large degree, adding to months of outflows. 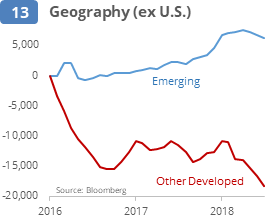 On a day the FOMC updated its interest rate policy, stocks, bonds, and gold all declined. SPY, TLT, and GLD were all down at least 0.1%. That has happened 9 other times on a day the FOMC announced its intentions, leading to a rebound in SPY over the next four days only 3 times.

Among major sectors, Utilities are showing the best breadth. More than 90% of the stocks are trading above their 10-, 50-, and 200-day averages, the most of any sector, even though XLU is still more than 5% below its 52-week high.

The post titled Yield Curve Favors Defense As ETF Investors Flee Developed Markets was originally published as on SentimenTrader.com on 2018-08-02.