Why this year is putting a nail in technical analysis

There has never been a worse time to be a technician.

Out of 22 technical trading strategies followed by Bloomberg, only 7 have shown a profit in 2021. That's among the fewest in 25 years.

"It's testament to the straight-up trajectory of stocks that virtually all signals that told investors to do anything but buy have done them a disservice this year. In fact, when applied to the S&P 500, 15 of 22 chart-based indicators tracked by Bloomberg have actually lost money..."

Granted, there is no wiggle room for interpretation here. Backtests require rules, and the rules use default settings. That doesn't allow for optimization or experience.

Backtests might show that using the Relative Strength Index (RSI) was a money-loser this year - indeed, it was the worst indicator - but in the hands of an experienced technician, it could have been wonderfully useful. And adjusting the length of some moving average strategies could have had a trader invested all year as momentum ruled, instead of being whipsawed on shorter-term moves.

The list of strategies shows how few have shown a positive return, with none beating buy-and-hold. 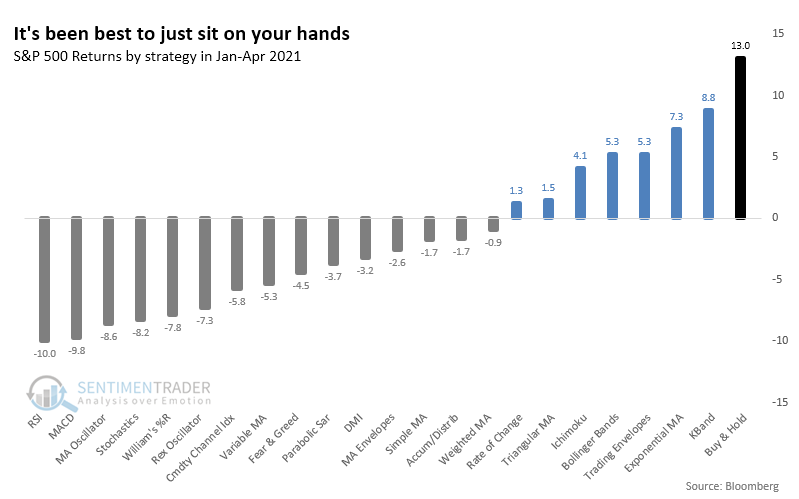 Going back as far as we can using daily backtesting data, this year is among the worst for using technical trading strategies through April.

Out of the 7 years since 1997 that saw the fewest number of successful technical trading signals, 4 of them showed a negative return either 2 or 3 months later, and 2 of the others sported only meager or temporary gains.

The post titled Why this year is putting a nail in technical analysis was originally published as on SentimenTrader.com on 2021-04-28.