Monday’s session was almost totally risk-on, even if the magnitude faded during the day. Most “risk-on” assets rose, which was the case on Friday, too. But over the past 200 days, risk-off sessions have dominated, reversing the trend that led up to the fall of 2018.

Since 1975, after spreads like this the S&P 500's future returns were okay – better than random but not by a lot. There was only a single loss from 3-12 months later, and the overall risk vs reward was skewed nicely to the upside.

Gold’s breakout to new multi-year highs last week generated a lot of attention, and even more optimism. It’s had trouble holding gains when that’s the case, and so far, has had some trouble again. Now it’s on the verge of a potential false breakout. 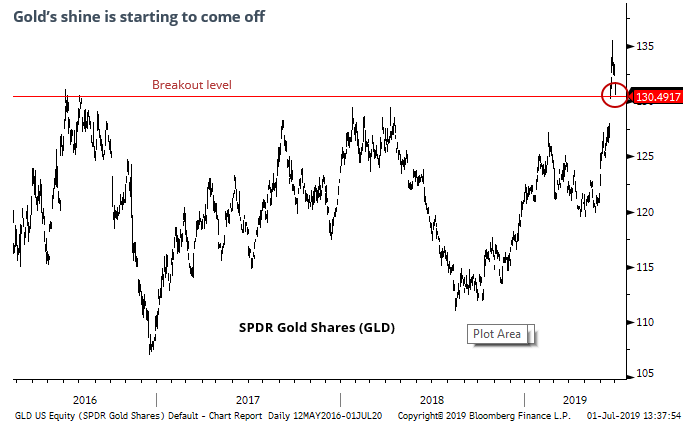 That always look horrid on a chart, but historically it has not been a reliable pattern for gold bears with only one of them ultimately morphing into a true, unequivocal failure

The S&P 500 is hitting new highs but the McClellan Summation Index is well below 700, and well more than 25% below its prior peak. That’s a minor worry – a year later, the S&P showed a return of 7.6% and 71% win rate with reward less than twice the risk. When there was less of a divergence, the S&P averaged 10.6%, with a 91% win rate and reward that was 3.4 times greater than risk.

The CNN Fear & Greed proxy model has climbed above 70 for the first time in more than 30 days, after having shown extreme pessimism. This has led to further gains in the S&P 84% of the time over the next two weeks.

The post titled Why Gold Bugs Shouldn't Fear A False Breakout was originally published as on SentimenTrader.com on 2019-07-02.