Why do small stocks look so expensive?

By some measures, stocks have never been so expensive, especially smaller ones.

A lot of small companies lose money, and those are often not included when firms calculate metrics like price/earnings ratios. If we use forward earnings estimates from Bloomberg, then we can alleviate some of those issues. Even so, small stocks haven't been this pricey in 25 years. 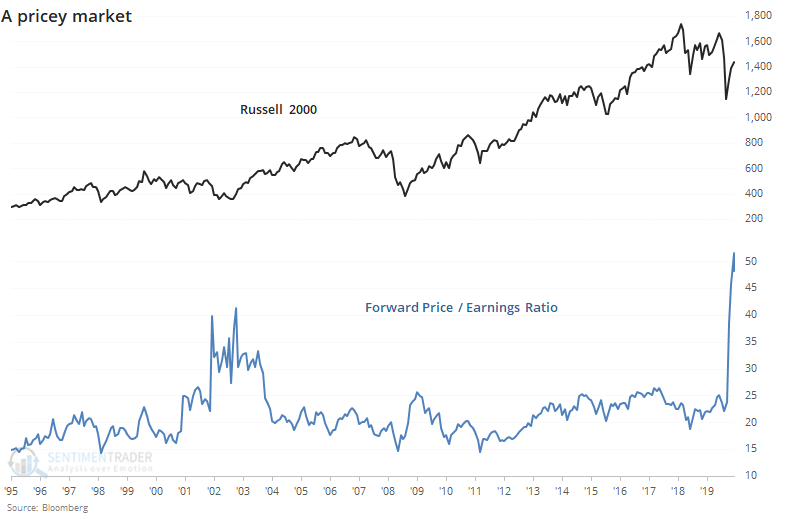 Granted, estimated earnings bring their own set of issues, especially now with uncertainty so high. The last time the forward P/E ratio for Russell 2000 stocks spiked above 40 was the bottom of the 2002 bear market, so this is not necessarily a reason to think stocks are expensive, just that uncertainty about profits is high.

As noted by Marketwatch:

"The reason these two firms report such low P/E ratios is that their calculations exclude firms that are losing money. In many years, this exclusion has little impact. But not now, since a significant percentage of the small- and mid-cap firms that are in the Russell 2000 index are losing money. By excluding those firms, the calculations artificially make the small- and mid-cap sectors appear significantly undervalued."

If we focus on that other issue, the fact that many of these companies are losing money, then it seems like a major negative. Only twice before in 20 years have such a high proportion of these small companies lost money, and as we see so often in markets, what seems true isn't necessarily so, because both times the Russell 2000 ended up rallying.

The post titled Why do small stocks look so expensive? was originally published as on SentimenTrader.com on 2020-07-08.