When this happened before, stocks never lost

Another thrust in participation

In early December, buying interest across stocks was broad and urgent. More than 80% of volume on the NYSE flowed into advancing securities, triggering a rare breadth thrust.

Within the most benchmarked index in the world, buying interest has been just as impressive. The percentage of S&P 500 member stocks trading above their 10-day moving averages cycled from only 25% on December 20 to more than 90% by last week. 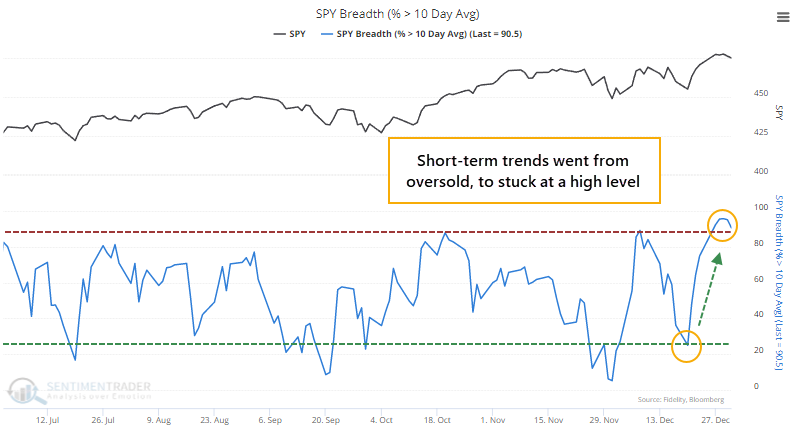 Our Backtest Engine shows that since 1998, the S&P 500 performed well after more than 90% of its stocks traded above their 10-day averages, preceding a positive one-year return after 187 out of 193 signals.

When these short-term trends cycled from below 25% (rounded) to above 90% on consecutive days, the S&P never lost ground over the next 6 months.

But it's even more impressive than that. By December 27, more than 90% of stocks were trading above their 10-day averages, and it hasn't dropped below 90% since then. This 5-day streak is tied for the 4th-longest since 1950.

In December, Jay noted a particular positive seasonal bias in gold mining stocks during the latter half of December.

Now let's consider the standard Santa Claus Miner Rally period during post-election years and extend the holding period through the close of January Trading Day of Month #11 in the mid-term election year.

The chart below displays the growth of $1 invested in HUI ONLY during the extended Santa Claus Miner Rally period every four years.

Out of 16 cycles, this pattern showed a profit 14 times.

If history proves an accurate guide, the rally in gold miners that started on 12/16 may extend through 1/18/2022. Nevertheless, traders must recognize the speculative nature of trading gold mining stocks and remember that significant loss is possible.

The post titled When this happened before, stocks never lost was originally published as on SentimenTrader.com on 2022-01-04.