When Options Traders Have Done This, Stocks Returned 50%

Stocks are holding up pretty well, especially in the broader market, and yet options traders are getting nervous.

Small options traders have spent 22% of their volume buying put options to open, tied for the 2nd-largest amount since last July.

This rise in put volume - both buying and selling - has pushed the Equity Put/Call Ratio to one of its highest levels of the past year, even though losses on stocks have been minor. Our De-Trended version of the ratio shows that a shorter-term moving average is more than 20% higher than a long-term moving average. This has preceded a very favorable annualized return since 1997. 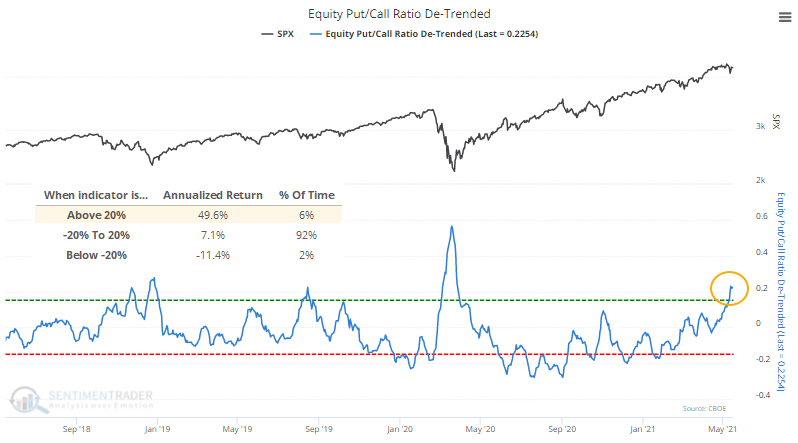 What's especially notable about the current instance is that it triggered while the S&P was within 1.5% of a 52-week high. That's only happened twice before in 25 years.

Looking for times when the ratio got this high with the S&P within 5% of a peak, returns were mixed.

The biggest risk is that after the massive speculative bubble reached in February, we could be heading into a larger corrective phase, in which case a modestly high put/call ratio won't help at all.

The post titled When Options Traders Have Done This, Stocks Returned 50% was originally published as on SentimenTrader.com on 2021-05-21.