Ultimate guide to the Hindenburg Omen

The Hindenburg Omen is an extremely useful technical indicator that when triggered, can predict stock market pullbacks, corrections, and crashes. It looks for "breadth divergences", which frequently occur before stock market declines. And while the name may sound funny (it's named after the Hindenburg disaster in 1937), data proves that this indicator is very accurate in sending bearish predictions for the stock market. In this post you'll discover:

What is the Hindenburg Omen

The Hindenburg Omen is used as a bearish indicator to predict declines in the stock market. When "triggered", this indicator predicts that the stock market will make a meaningful pullback or correction within the next 3 months.

This indicator is based on the logic that a lot of stock market declines are preceded by "breadth divergences".

This indicator was developed by Jim Miekka in the 1990s, who named this after the Hindenburg disaster of May 1937 in which the airship Hindenburg caught fire and struck disaster, ending the airship industry. While this indicator may have a funny name, it is a very serious and useful technical pattern that has a good track record. Focus on the logic of the indicator and not its name. Later on in this post we'll use data to see just how useful the Hindenburg Omen really is.

How to calculate the Hindenburg Omen

There is no "official" calculation for the Hindenburg Omen. But the one that's commonly used (which we use) is as follows:

*Some traders might use slightly different thresholds (e.g. 2.2% instead of 2.8%), but this is what we've found to be most useful.

When the signal triggers, it highlights a "split" market in which participation is unhealthy. Perhaps there is trouble brewing beneath the surface, with the smart money selling some stocks even though the overall index is going up.

When all 3 criteria are satisfied, the Hindenburg Omen is "triggered", so traders should turn bearish. One signal is already bearish for the stock market. But if a cluster of signals are triggered together (e.g. triggered yesterday, 3 days before, 2 weeks ago, and also 3 weeks ago), then that is even more worrisome for the stock market's rally.

Traditionally, the signal is cancelled after 30 days or if the Oscillator turns positive again. Here's what these signals look like on our charting software: 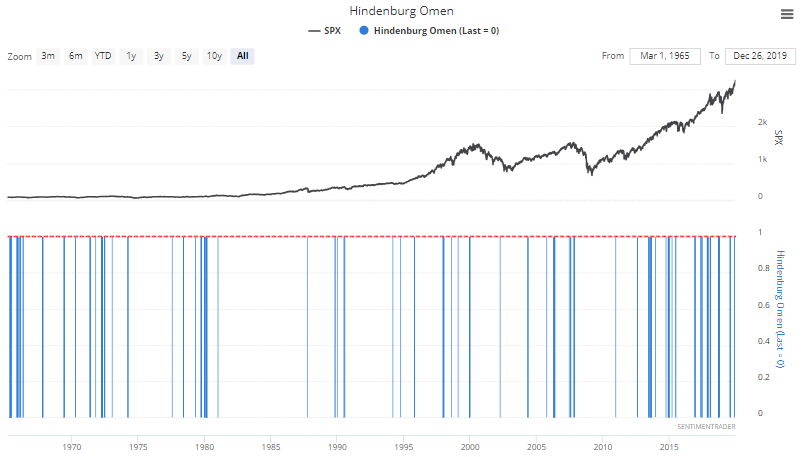 The blue bars represent whether or not the Hindenburg Omen has been triggered on any given date.

Skepticism towards the Hindenburg Omen

Many traders are skeptical about this indicator. In fact, whenever the Hindenburg Omen is triggered, a bunch of journalists tend to write articles about how useful it is while other journalists poo-poo the indicator and tell their readers to ignore its warnings.

For starters, the Hindenburg Omen has a funny name, which doesn't lend credibility to it. But names shouldn't matter - it's just a marketing gimmick. This indicator would "sound" a lot smarter if it was called "The Breadth Divergence While Stocks are In an Uptrend" indicator.

But there are more legitimate concerns:

Regardless of the debate, one thing is for certain. The Hindenburg Omen works. Now of course it doesn't work 100% of the time - there is no such thing as a Holy Grail in financial markets. But its overall track record is pretty good. Here's the data to prove it.

Does the Hindenburg Omen actually work? Here's the data and proof

Our Backtest Engine is a great tool which allows users to test and see exactly how well technical indicators work. No more guessing, BS, or any of the hype that's so common on the internet. Just hard data and facts. So let's apply it to the Hindenburg Omen.

Hindenburg Omen for the NYSE

Using our Backtest Engine (backtesting software), we can see exactly what the S&P 500 did after the Hindenburg Omen was triggered on the NYSE. 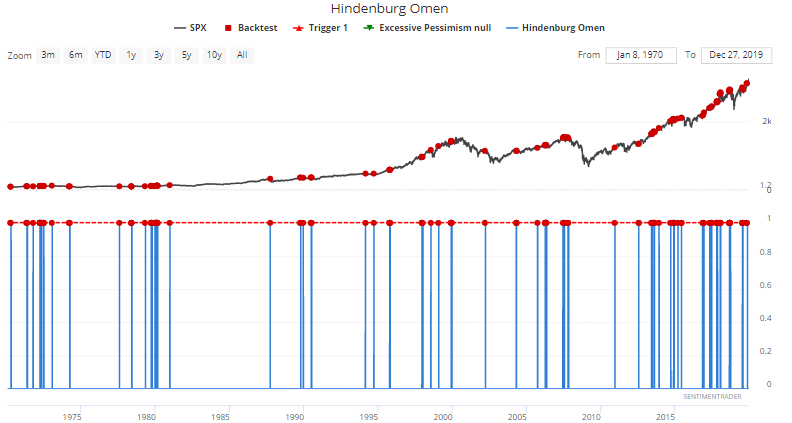 As you can see, the S&P 500 (U.S. stock market index) is usually quite weak over the next 1-3 months. Risk:reward favors the bears, and the stock market falls more often than it rallies. This is as we suspected - a breadth divergence (Hindenburg Omen signal) leads to a decline in the stock market.

Here are some cases in which the Hindenburg Omen successfully predicted a decline in the S&P 500.

A massive cluster of Hindenburg Omens were triggered throughout September 2018. Even though the overall U.S. stock market index was making new all time highs, many stocks were not participating in the rally. The stock market promptly began a 3 month correction in which the S&P 500 fell approximately -20% 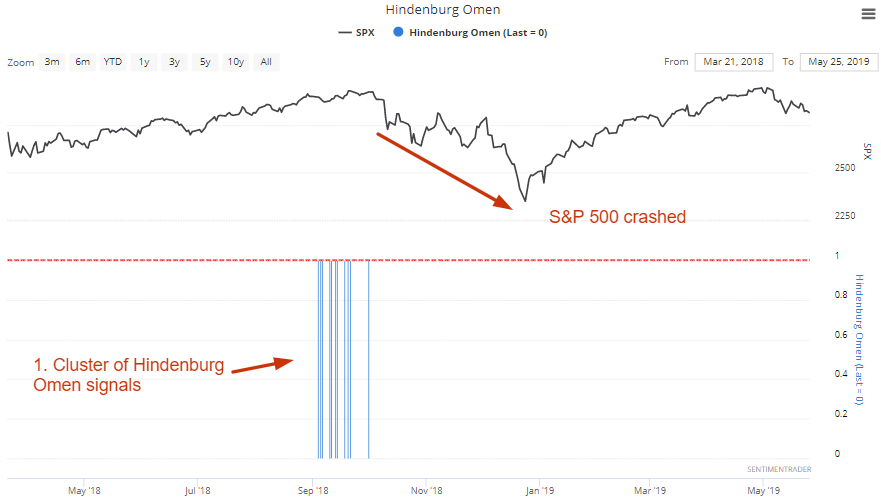 With the stock market still close to an all-time high and while many stocks were still rallying, a large number of stocks were already falling significantly. As a result, a single Hindenburg Omen was triggered. As they say, the rest is history. The U.S. stock market soon witnessed its largest 1 day crash in history. 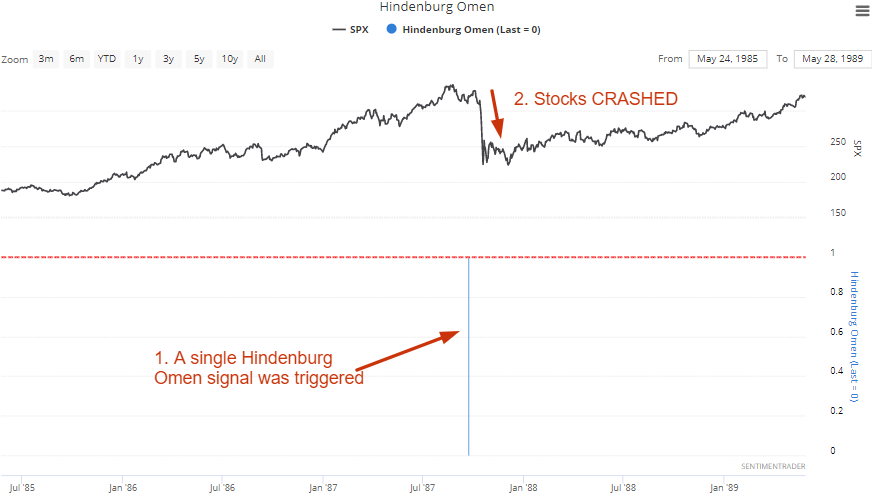 Here's a specific year in which the Hindenburg Omen repeatedly failed to successfully predict a pullback/correction. 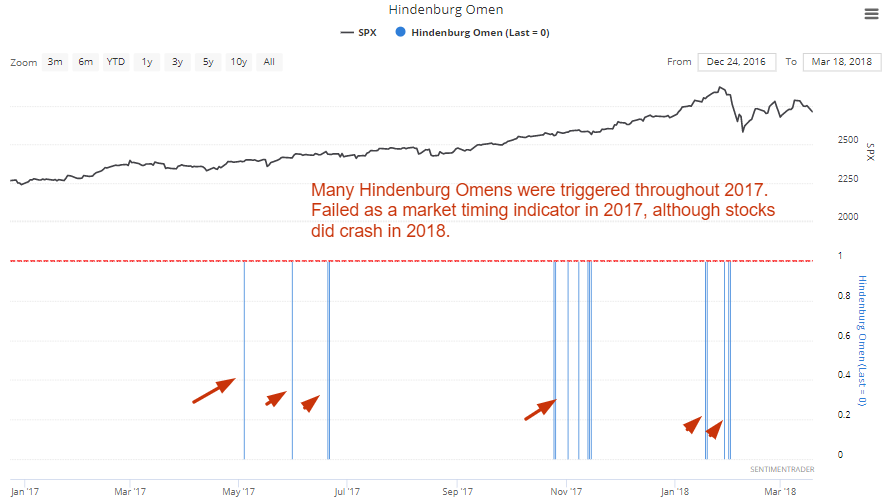 Hindenburg Omen for the NASDAQ

We can run the same analysis on the NASDAQ and ask the same question: what happened next to the NASDAQ Composite when the NASDAQ Hindenburg Omen was triggered? 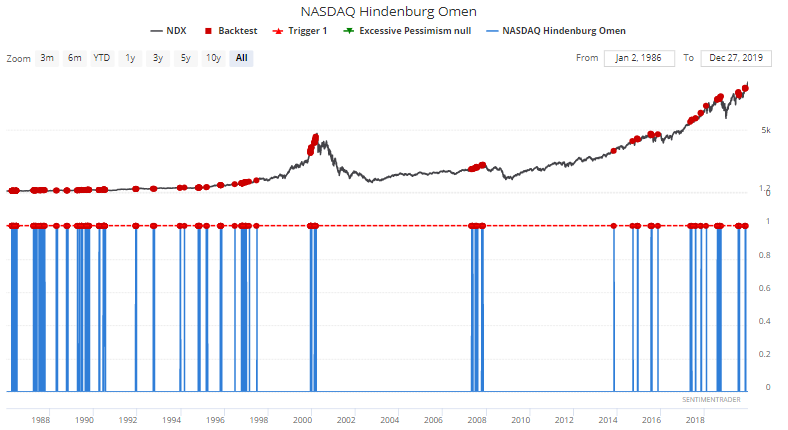 This wasn't as immediately bearish for the NASDAQ over the next month, possibly because the NASDAQ is more prone to "animal spirits" in which it overshoots in the short term. But with that being said, the NASDAQ's returns over the next 3-6 months were still more bearish than bullish.

How to make the Hindenburg Omen more useful

How to see this indicator calculated in real time

The Hindenburg Omen is not easy to calculate in real-time, and many charting services don't offer this indicator (which is a shame, considering how useful this is). With that being said, you can access this indicator in real-time by subscribing to our SentimenTrader service. Don't worry about the calculations - we've already done this.

The Hindenburg Omen - a bearish sign of breadth divergence - is a useful technical indicator for predicting stock market pullbacks, corrections, and crashes. It doesn't always successfully predict one - some bearish predictions don't pane out. But that's just the nature of successful trading. Successful trading is about having an edge, and no edge works 100% of the time. Even if you have an 80% chance of success, 1 in 5 attempts will fail.

As we've demonstrated with the data above, the Hindenburg Omen successfully predicts market declines more often than not. It is a useful technical indicator that every trader should consider following, particularly if you are interested in short term or medium term trading.

The post titled Ultimate guide to the Hindenburg Omen was originally published as on SentimenTrader.com on 2020-01-09.