The first two sessions of the week saw an almost ‘no bid’ situation. Fewer than 10% of securities on the NYSE managed to rise either day and there was (almost) less than 10% of volume flowing into the stocks that did manage to rise. Over the past 60 years, there haven’t been many one-two punches like this.

Even on Friday, there were bouts of get-me-out selling. The average TICK reading at the lowest point over the past three sessions has been below -1500, more than 50% of issues on the NYSE.

Going back to 1990, there have been a handful of days when the 3-day average of the lowest TICK reading of the day exceeded -1500. Because the number of issues changes over time, we also looked at dates when the average was at least -50% of total issues (over the past 3 days, it was -52% of issues). This kind of selling has led to consistent upside over the medium-term.

With the heavy selling over the past few sessions, fewer than 50% of the S&P 500's members are above their 200 day averages for the first time in more than a year. 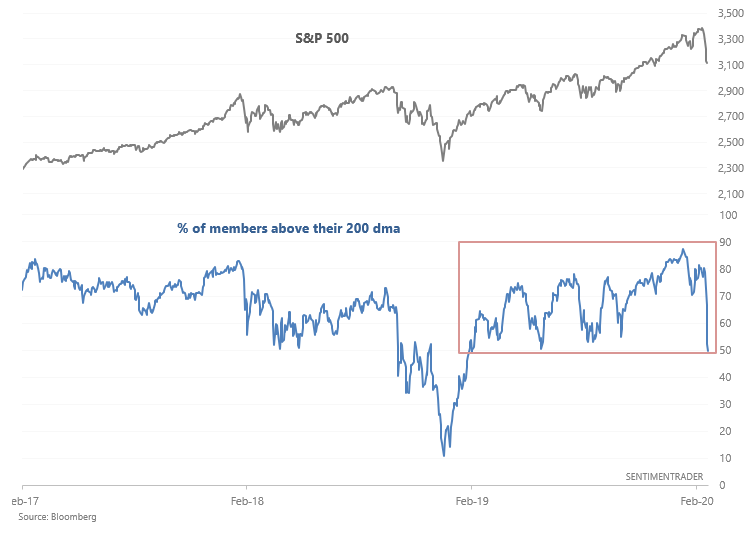 When other long uptrends were broken, the S&P often faced weakness over the next week but that's about as long as it tended to last. By a month later, most were higher.

The post titled Traders are showing get-me-out behavior was originally published as on SentimenTrader.com on 2020-02-27.