According to a major investment bank, stocks are trading just like they did during the recovery in 2009.

As noted on MarketWatch, Morgan Stanley shows that the percentage of stocks within the S&P 500 that are trading above their 200-day averages looks just like it did when they emerged out of the financial crisis. 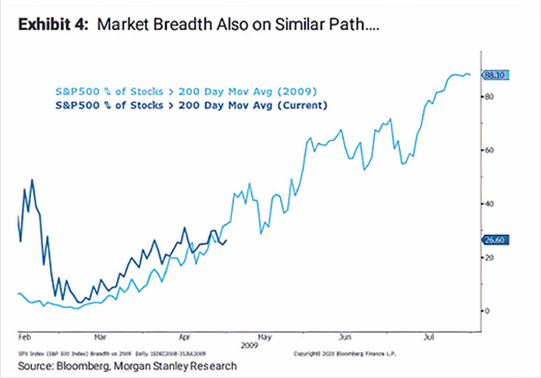 In the decades that we've been looking at price analogs (how highly correlated a current period is to the path during other periods), they've proven to be modestly useful.

The main problem is that it's way too easy to cherry-pick examples based on whatever outlook the analyst wants to convey. That's why we use a transparent methodology, going back as far as history allows, and show every occurrence.

When we do this with the percentage of stocks above their 200-day moving average, the initial recovery in 2009 doesn't even make the list.

Below, we can see the 4 most recent instances. This is not the S&P 500 we're looking at, it's the percentage of stocks above their 200-day averages, showing the most highly-correlated paths to what we've just seen over the past 40 days. 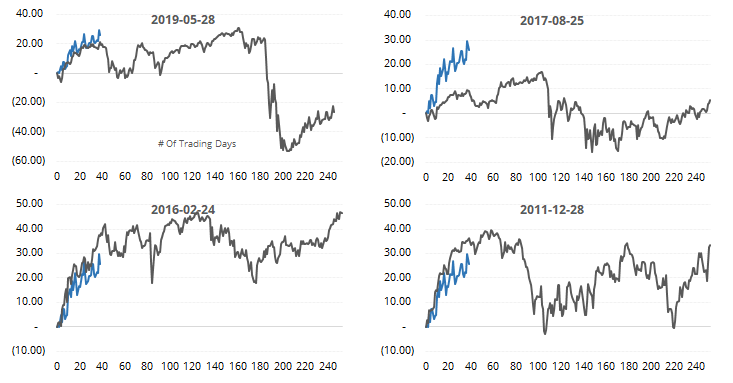 For the S&P 500 index itself, the most highly-correlated periods showed decent gains, especially longer-term. While it might not be the slam-dunk positive it was if we rely on the 2009 template, it does suggest a modest upside bias long-term.