This Hasn't Happened To Bonds In 3 Years

The Optimism Index for bonds hit an extreme low last October. The rally since then has caused it to cycle to the opposite extreme, with the 20-day average now the highest in almost 3 years.

Just as it has been rare to see any sustained losses in Treasuries when the Optix gets as low as it did last October, it’s rare to see sustained gains when it gets this high.

Economic surprises in the U.S. have consistently been to the downside over the past few months, and bond investors have been extrapolating those forward, pricing in slower growth and higher bond prices. It usually hasn’t worked in their favor.

Over the next six months, T-note futures showed a gain only once out of nine attempts. Risk over that time frame was more than three times reward, which is not something we often see, especially for a “safe” asset like bonds.

Among other notable signs of sentiment on bonds, global hedge fund managers have covered their shorts, Rydex mutual fund traders are nearly the most bullish on record, small speculators are the most exposed in 18 years, and fund investors have piled into bonds over the past 6 months.

President Trump has taken to Twitter again to trumpet stocks’ good performance. The Trump Tweet-O-Meter has jumped to the highest since January 2018. 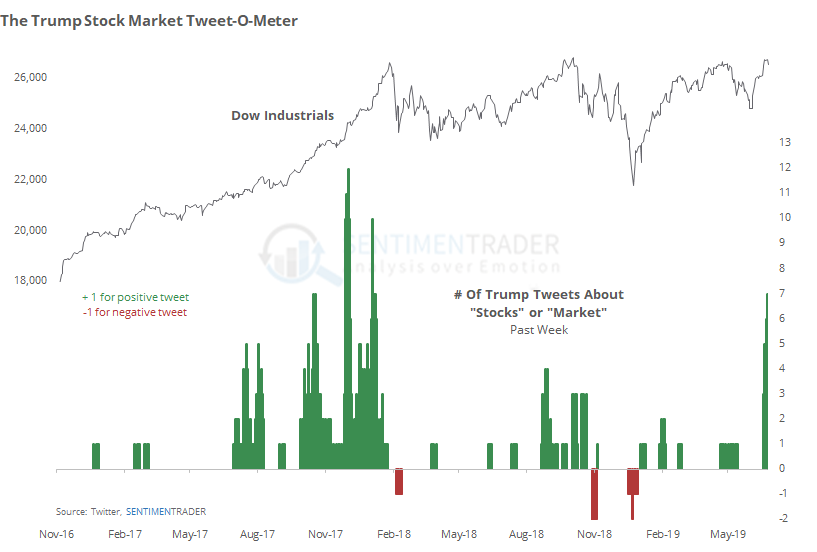 Natural gas is the most-hated commodity. Its Optimism Index just dipped below 23. Over the past 15 years, the Backtest Engine shows it rebounded 86% of the time over the next month. Even a challenged product like the UNG fund rallied 74% of the time.

The post titled This Hasn't Happened To Bonds In 3 Years was originally published as on SentimenTrader.com on 2019-06-27.