For the first time in a year, economic data is disappointing those who predict it.

The Citi Economic Surprise Index briefly turned negative near the end of last week. That's the first time the index has been negative since May of last year.

The index measures how much that economic data is beating or missing economists' forecasts. As a group, economists tend to self-correct as new data comes in, and then they extrapolate into the future, so the index consistently swings between extremes. 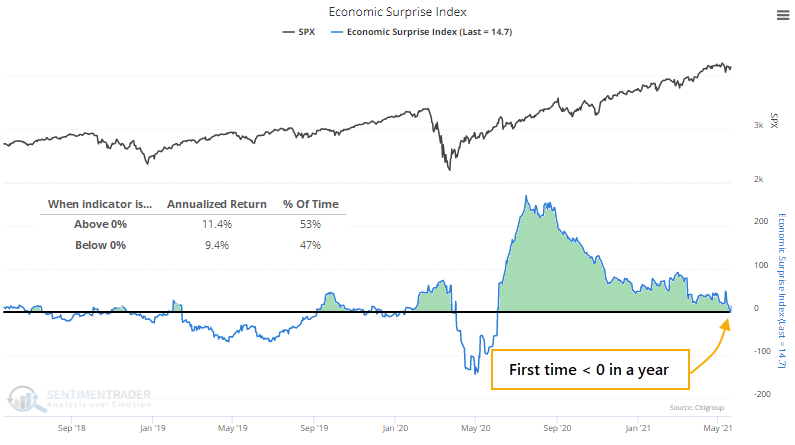 We can see from the chart that the S&P 500 has a very slight tendency to show a better return when surprises are positive than when they're negative, but it's not a big difference.

What may be more notable is that this is ending a record streak of days with positive surprises.

Perhaps stocks will dip once economic data starts to disappoint after investors had become comfortable with positive surprises? To check, we can look at the S&P's future returns after the few other times when a long streak of positives was interrupted.

There were only four other times when Economic Surprises lasted six months or longer, and after the ends of those streaks, the S&P showed mixed returns. There were two times when it fell immediately, and the other two saw their short-term gains wiped out in the months ahead. All four showed a positive one-year return, though.

The post titled This Fundamental Indicator Just Ended a Record Positive Streak was originally published as on SentimenTrader.com on 2021-05-25.