The spread in sentiment between Smart and Dumb Money is historic

The past couple of weeks has triggered a drastic shift in sentiment. The confidence in a rally among Smart Money indicators has jumped. It would be even more extreme if there wasn't a curiously large plunge in "smart money" commercial hedger positions in equity index futures. 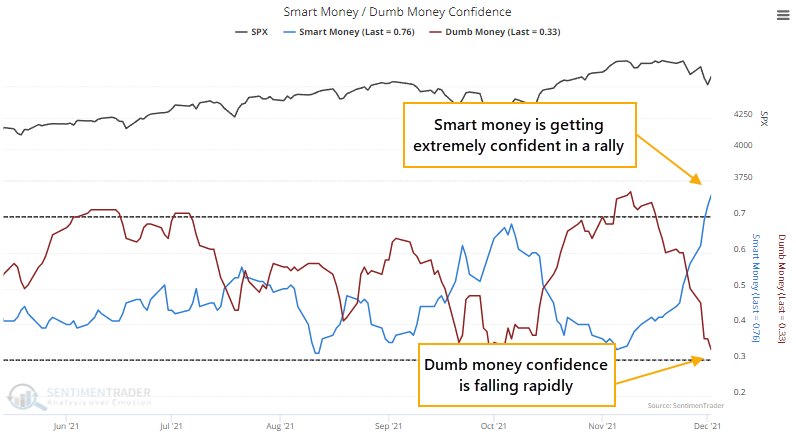 This adjustment in behavior has caused the spread between them to rise above 45%. The S&P 500's annualized return when the spread is above 45% was +52.6%, nearly 10x the return when sentiment was neutral.

A buy signal from the Kospi

A new signal from a mean reversion model that utilizes the percentage of KOSPI index members below their lower Bollinger band registered an alert on Monday.

This signal has triggered 19 other times over the past 18 years. After the others, future returns and win rates were good on medium-term time frames.

Jay highlighted relative trends in and among stock indexes, assets, and bonds.

Sentiment has whipsawed quickly over the past month, from extreme optimism to some signs of extreme pessimism. Most of the intermarket relationships that have been in force for the last year remain in force, however. At some point, the domination of U.S. Large-Cap stocks will end, but so far there is little sign of it.

The post titled The spread in sentiment between Smart and Dumb Money is historic was originally published as on SentimenTrader.com on 2021-12-08.