The smallest traders are the biggest players

Throughout much of July and August, Dumb Money Confidence was exceptionally high, which typically precedes poor returns in stocks. Yet the major indexes consistently hit new highs. Almost never before has "dumb money" been so right for so long, which we also saw has typically been about "it" for those traders.

Perhaps now we know why.

The biggest story in markets over the past few days has been the unveiling of Softbank as a large buyer of call options on a few big tech stocks. But this is not really the true story at all. It's easy to package and sensationalize a simple narrative that a single huge entity has been buying a bunch of calls. The more accurate story is that it's mom-and-pop driving these stocks higher, not Softbank.

Unless Softbank's traders divided up their orders into tiny lots, the massive jump in call buying is from the average stay-at-home gambler. And last week's volatility didn't discourage them, it did the exact opposite. They added to their bullish bets.

Among trades for 10 contracts or less, 53% of total volume went into buying call options to open. That's a record high.

These small traders have become the biggest part of the options market. Since mid-July, trades for 10 contracts or fewer have consistently accounted for more than 60% of all opening call purchase premiums, massively dwarfing larger trade sizes. 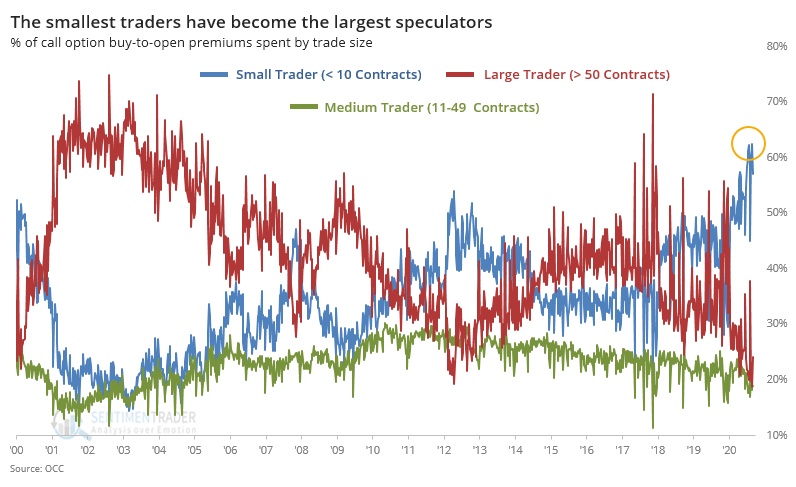 Over the past four weeks, retail traders have generated exposure accounting for nearly 1.7% of the S&P 500's entire market cap. In the coming weeks, most of these contracts are going to expire, exposing traders who bought the underlying stocks as a hedge. Unless they sell - and that's a lot of stock to sell.

The post titled The smallest traders are the biggest players was originally published as on SentimenTrader.com on 2020-09-09.