The Panic Button Has Been Pressed

The Panic Button has been pressed

It’s been several years, but the Panic Button has been pressed.

The last time we looked at such stress was in January 2016 but we’re far beyond that now. The indicator incorporates measures which spike higher when uncertainty about the economy, corporate outlooks and stock prices are high, and reach extreme high levels only during times of outright panic.

Anything above 3 on the model could be considered “panic.” As a reflection of just how much anxiety is being priced in, on Thursday the Panic Button hit a record high of 7.7. Based on preliminary data, it eclipsed that again on Monday.

This was a tip-off of something sinister in 2007. Although stocks showed gains over the next 2-3 months, it preceded a large longer-term drawdown. And high panic did not mean an imminent low in most cases, though it was close.

The Wall Street Journal noted that the S&P 500's MACD histogram is at its most extreme ever. Check out our Ultimate Guide to MACD for more background on this technical indicator.

The MACD histogram on a multi-decade time frame isn't very useful since it is a nominal figure. We need to calculate the MACD histogram as a % of the S&P 500's value for an apples-to-apples comparison. 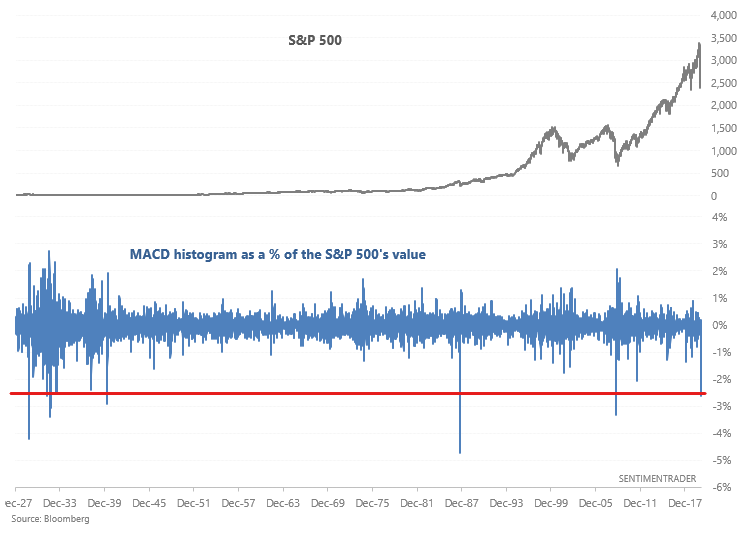 As you may expect, this is still quite extreme. The last 2 times this happened was during the 2008 crash and 1987 crash. Overall, such panicked selling usually led to a bounce over the next week.

The post titled The Panic Button Has Been Pressed was originally published as on SentimenTrader.com on 2020-03-17.