The meaning behind Tech's big swings

There has been a lot of rotation going on in markets lately, between assets, indexes, and factors.

Mark Hulbert, writing in Barron's, noted the Nasdaq's sudden snapback versus the Dow Industrials the other day. Once again, the Nasdaq surged relative to the Dow, adding to the count of outsized moves in recent months.

We certainly saw that at the top of the dot-com bubble. Over the three months prior to that top, there were no fewer than 14 trading sessions in which the Nasdaq's alpha over the Dow was at least two percentage points. No other three-month period over the past 50 years has seen as many large positive alphas between the two indexes.

Going back further, we can look at the daily changes in the total return in Technology versus Industrial stocks. The chart below shows a running count of how many days there were in the past year when Tech outperformed Industrials by 2% or more. Even with some big relative losses in recent days, Tech has put in a large number of good performances over the past year.

While it wasn't a good timing signal, the overriding message was clear, or at least as clear as it can be with a sample size of 2. Over the next 2-3 years, Technology greatly under-performed Industrials after the other instances.

Clean...and optimistic. Investors in the iShares Global Clean Energy ETF, ICLN, are pricing in some good times. A 20-day moving average of the Optimism Index has just reached a new record high. 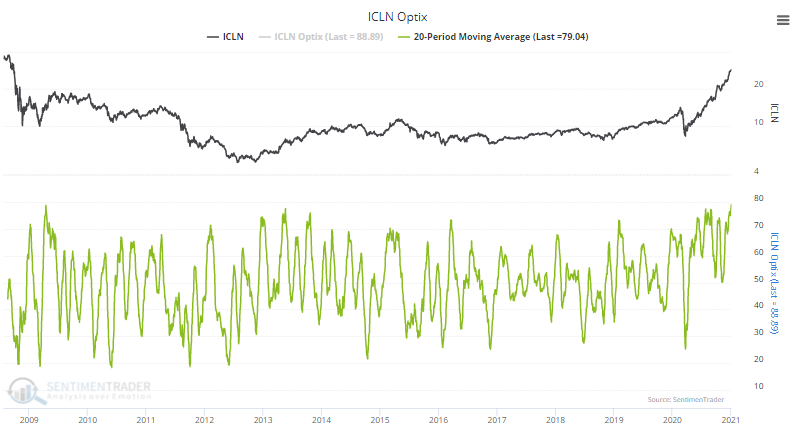 Reversal of fortunes. With a jump in stocks hitting new highs, and then falling back, the number of Buying Climaxes among stocks in the S&P 500 index has spiked to one of the highest levels in a year. 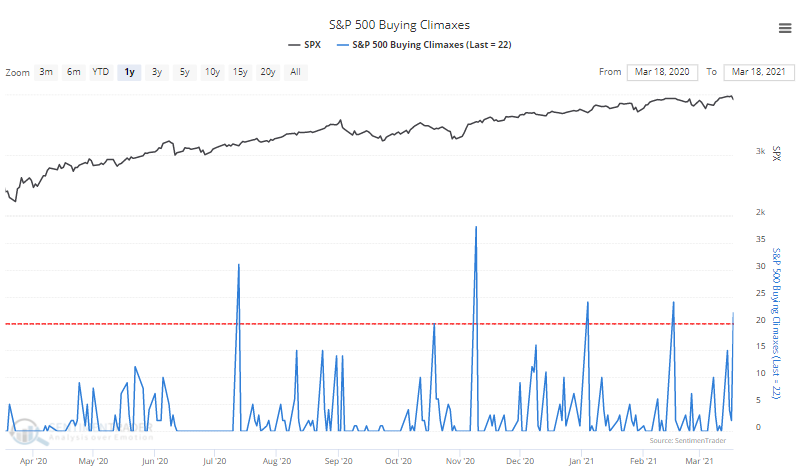 Too positive about junk? Twitter users have been tweeting unusually positive things about the most popular high-yield bond fund, HYG. Social Sentiment, which is calculated like a put/call ratio, has been at record lows over the past month. This means that our machine learning algorithm has determined that the vast majority of tweets have expressed positive sentiment about the fund. 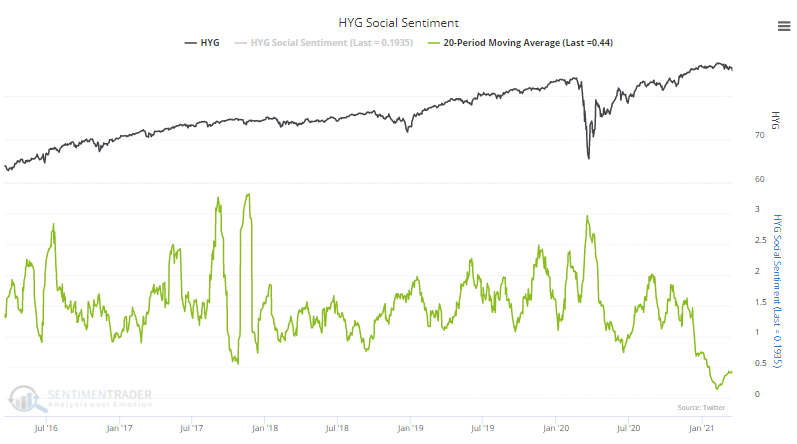 The post titled The meaning behind Tech's big swings was originally published as on SentimenTrader.com on 2021-03-19.