Over the last couple of days, Dumb Money Confidence has poked above 80%. While it has gone higher over the past 20 years, this is in the top 2.3% of all readings.'

It’s high enough that it has preceded weak returns, especially in recent years, and those times when stocks aren’t coming out of a major decline.

A fundamental indicator created by Yardeni Research, the Boom-Bust Barometer, has been “busting” even while stocks reach new highs. The Barometer hit a 52-week low this month even as the S&P 500 hit an all-time high. 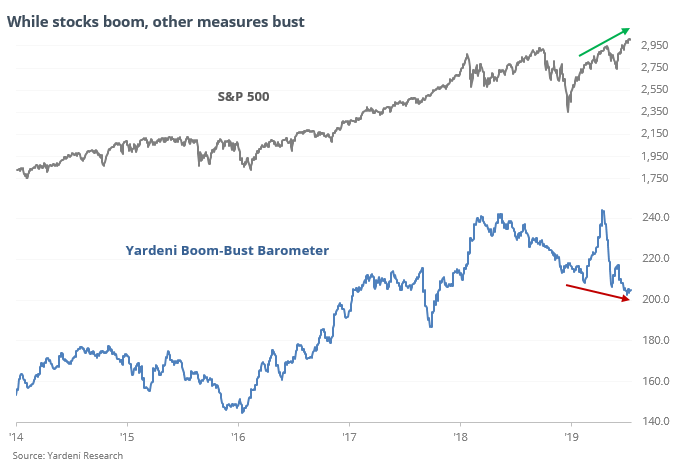 This has indicated some troubling conditions in the past but was too inconsistent to be considered a warning. Curiously, it led to atrocious returns in gold and bonds.

The Investor’s Intelligence survey of newsletter writers now has a Bull Ratio in the top 5% of all readings in the past 30 years. Such high readings led to poor 1-year returns, with the S&P averaging only 2.3%. Excluding the super-momentum years of 2013 and 2017, that dropped to -1.3%, with risk of -10.9%.

The Dow Jones Oil & Gas Index is now negative over the past 6 months while oil futures are up more than 8%. That has happened on 413 days since 1991, leading to a positive return in the sector 78% of the time a year later, averaging +12.2%. When the opposite occurred, that dropped to a 56% win rate, averaging +5.2%.

The post titled The Dumb Money Is Nearing Maximum Confidence was originally published as on SentimenTrader.com on 2019-07-18.