The Dow Is Being A Dud

The Dow Industrials dropped below the 50-day average for the first time in months. When it loses its trend after such a long time, and when so near a multi-year high, it has tended to snap back. It was an even better sign for the S&P 500. 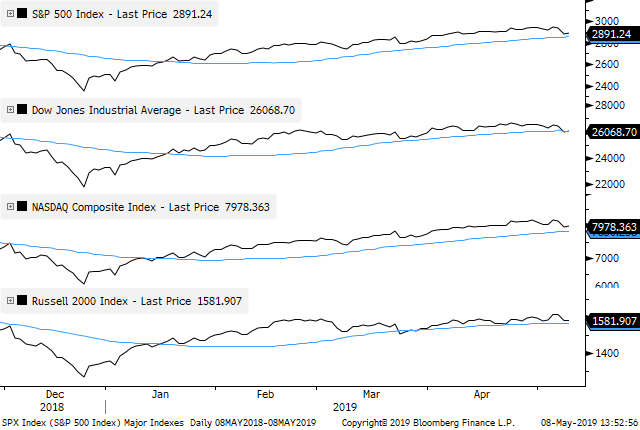 It was also the only one of the “big four” equity indexes to drop below its average, which has also led to positive returns every time.

Over a 5-week span through early May, the S&P 500 gained more than 4%, but equity mutual fund investors pulled more than $33 billion out of the market. That seems like it should be a solid brick in the “wall of worry” but future returns were mixed.

The VIX Term Structure remained above 1 on Wednesday, meaning that traders were pricing in a greater probability of shorter-term volatility than longer-term volatility. That happens during periods of high concern. We saw in a premium note that the first signal in 3 months led to a rebound in the S&P 92% of the time. The Backtest Engine shows that any reading above 1 when the S&P was above its 50-day average led to gains a month later 89% of the time.

We added the McClellan Oscillator and Summation Index for the high-yield bond market to the site. These are useful to see underlying strength and momentum in that corner of the market, which also often translates to the stock market. As a simple test in the Backtest Engine, when the Oscillator for bonds is above zero, the S&P 500 has returned an annualized 10.6%. When below zero, that falls to 5.2%.

The post titled The Dow Is Being A Dud was originally published as on SentimenTrader.com on 2019-05-09.