The buck loses its trend, while commodities gain theirs

The dollar loses its medium-term trend

The U.S. dollar has been on investors' radars for months as it climbed to its highest level in more than a year. In recent weeks, the uptrend stagnated. The buck crossed below its 50-day average on Friday, followed by a lower low on Tuesday potentially confirming the move lower.

The dollar had gone 80 sessions above its 50-day average. The drop on Friday ended one of its longest-ever streaks above its medium-term moving average.

When the dollar fell below its 50-day average for the first time in months and had set a 52-week high at some point in the prior 2 months, it has usually kept falling. Its shorter-term returns were fragile.

We might expect a falling dollar to be a net positive among other markets. Gold did tend to see a quick bounce, but it showed weak returns after that. So did crude oil and commodities in general.

Most commodities are above their averages

There has been a broad surge in commodities, and most are now trading above their 50-day moving averages.

Dean assessed the outlook for the Bloomberg commodity spot price index when a basket of spot commodities trading above their 50-day average reverses from less than 40% to greater than 83%. 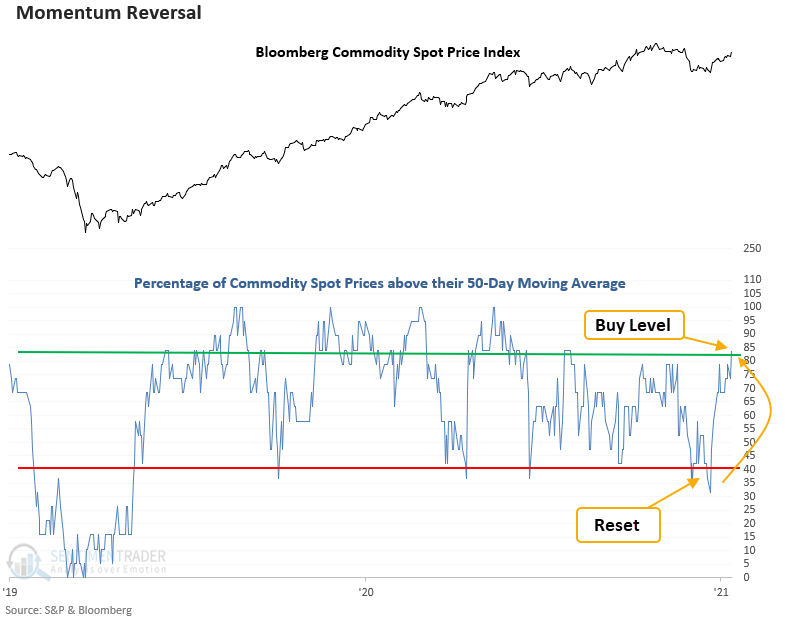 This signal has triggered 57 other times over the past 51 years. After the others, commodity future returns, win rates, and z-scores look solid across all time frames, especially the 3-month window.

The post titled The buck loses its trend, while commodities gain theirs was originally published as on SentimenTrader.com on 2022-01-13.