A compelling reason for caution last fall was the kind of split market that triggered a cluster of Hindenburg Omen warning signs. Over the past two weeks, there has been a cluster of signals that are the exact opposite of the Hindenburg (we'll call them Apollo Prophesies just for the heck of it), and that has usually been a good sign. 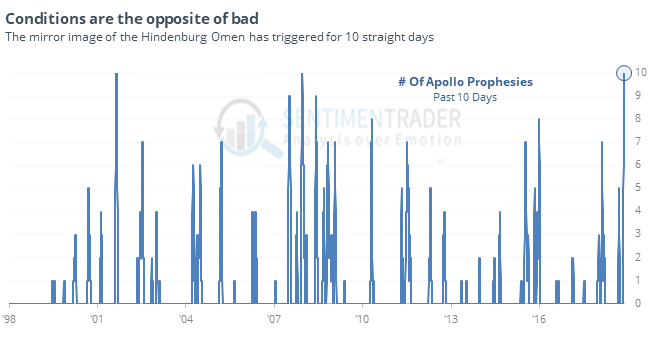 After the handful of signals since 1965, the S&P managed to rise every time over the next two months, but a few of those failed over longer time frames.

A model from the NY Fed is showing the highest risk of recession in a decade.

It’s a mild concern, since it has a decent record of preceding recessions since 1960, and returns in stocks once risk got this high were modestly negative. For bonds, it was more of a positive longer-term.

The Nasdaq Composite is the first of the major averages to regain its 50-day average after going months below it.

The Optimism Index for VXX has dropped below 15 for the first time since November. According to the Backtest Engine, over the past 5 years when it has done this, the VIX “fear gauge” jumped over the next week 79% of the time and the S&P 500 rose 45% of the time.

The post titled The Anti-Hindenburg Omen; Fed Recession Risk Rises was originally published as on SentimenTrader.com on 2019-01-16.