Out of the S&P 500’s 11 major sectors, only one has made a fully recovery from the December decline, and it’s an important one. The information technology group has fully recovered from its decline of more than 24%. 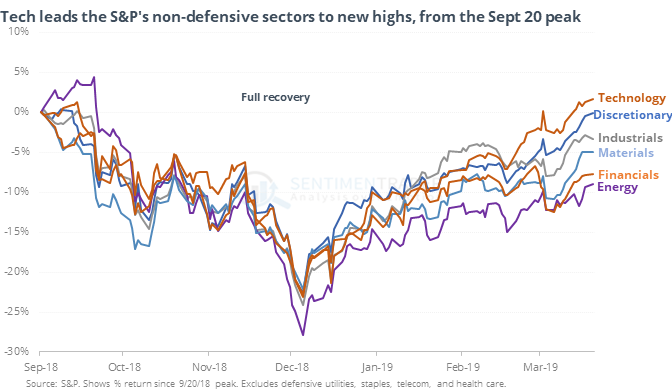 Other times it fully recovered a drop of 20% or more within a six-month window, it showed excellent returns going forward. Most impressively, a year later the sector was higher by at least 13% every time. Returns were excellent for the S&P 500 itself, as well.

The persistent bid under stocks has buoyed sentiment, and the spread between Smart and Dumb Money Confidence hit a multi-year low this week.

When it first hits this wide of a spread, it has not been a negative, but as the days progress with this kind of extreme, the risk/reward quickly turns negative.

The S&P lost more than 0.5% on Tuesday for only the 9th  time since the December 24 bottom. After 7 of those other 8 down days, the S&P rebounded over the next two days and returned an average of more than 1%.

The post titled Tech's Perfect Signal was originally published as on SentimenTrader.com on 2019-04-10.