The Nasdaq 100 (NDX) is hitting new highs, but options traders are pricing in more volatility as we enter earnings season, with the NDX's version of the "fear gauge" (the VXN) rising in recent days. Entering Monday afternoon, the NDX was up more than 1%, and the VXN was up by more than 8%. That had never happened before.

It's also odd that even while the Nasdaq Composite was setting record highs, momentum in breadth underlying that market has been poor. The McClellan Oscillator for the Nasdaq was below -25 even as the index was setting new highs earlier this week.

This is a little more troubling given Monday's rejection of a record high in the bigger tech stocks. The Nasdaq 100 rallied more than 2% to an all-time high, only to reverse and close down by more than 1%. The only other day when that happened was March 7, 2000. Looking at smaller reversals, the tone over the next 2-3 months was still generally negative.

The reversal in the Nasdaq 100 coincided with the 2nd-largest number of buying climaxes in those stocks as well. Only early 2018 had more. 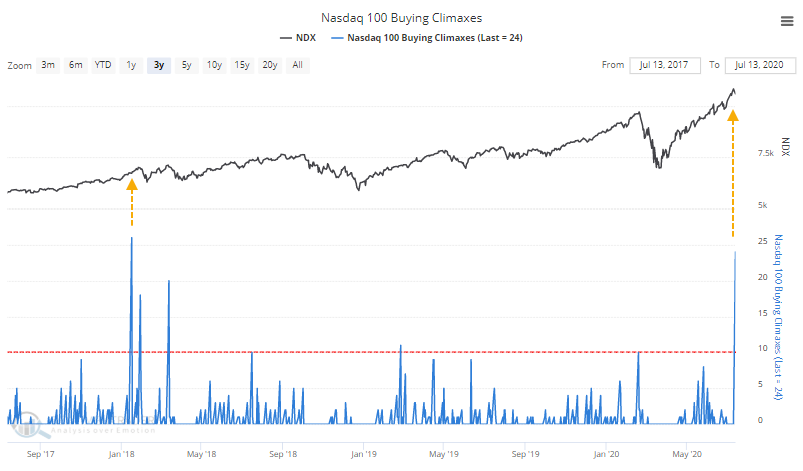 The run in these stocks has been historic, and the momentum in many stocks underlying the move in the indexes is waning. Combined with reversals in some of them as we saw on Monday, it's a yellow flag.

The post titled Tech titans show sign of fatigue with spike in buying climaxes was originally published as on SentimenTrader.com on 2020-07-15.