Tech Has Led - What That Should Mean For The Summer

The S&P 500 has enjoyed great gains through the first half of the year, as have most of its sectors. Looking at other years when the S&P gained at least 10% through June that had the most similar returns among sectors, the next couple of months tended to be rocky. 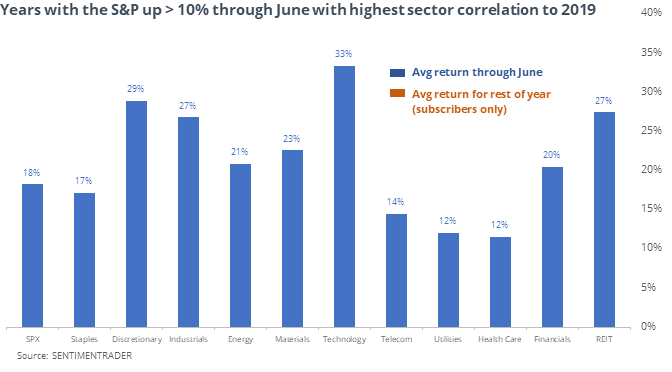 Overall, the years with sector returns most like 2019 did not do that great in the 1-3 months ahead. Only two of them tacked on more gains. That contrasts with the most dissimilar years, which saw better gains in the months ahead.

Despite accumulated gains as the year has rolled on, investors keep pulling money from equity mutual funds.

This is largely a secular trend at this point and not necessarily a sentiment tell, but other years when this occurred saw decent gains over the next 6 months. That is quite a bit better than when there were large fund inflows to go along with the rise in stocks.

Whether it’s due to investors’ reactions to Fed chairmen or just simple seasonality, stocks have struggled after the July version of the Monetary Policy Report to Congress. Since 1996, the S&P was positive a month later 41% of the time, averaging -0.7%. When it was within 1% of its 52-week high at the time, then it gained only 1 time out of 6 attempts. The dollar also tended to decline.

The ICI reported that investors pulled $28 billion from equity mutual funds and ETFs in the week leading to the July 4 holiday. That’s the 4th-largest outflow since 2007. Seems like a contrary indicator, but the Backtest Engine shows outflows of $20 billion or more led to losses in the S&P 7 of 9 times 2-3 months later.

The post titled Tech Has Led - What That Should Mean For The Summer was originally published as on SentimenTrader.com on 2019-07-11.