Last week, despite a big rally in stocks, individual investors in the AAII survey were not showing much optimism that it could continue. That continued this week, with half of the respondents expecting stocks to drop in the months ahead. Over the past 10 weeks, bears have averaged more than 46% of total respondents, among the most persistent bouts of pessimism in the survey's history.

When we aggregate surveys covering a broad swath of investor types, it's apparent that the mom-and-pop types who frequent the AAII survey are not alone. The AIM Model this week is on track to decline from last week's still-low 23%. In the face of a huge rally off the lows, folks still aren't buying into it. Or at least, that's what they're saying. 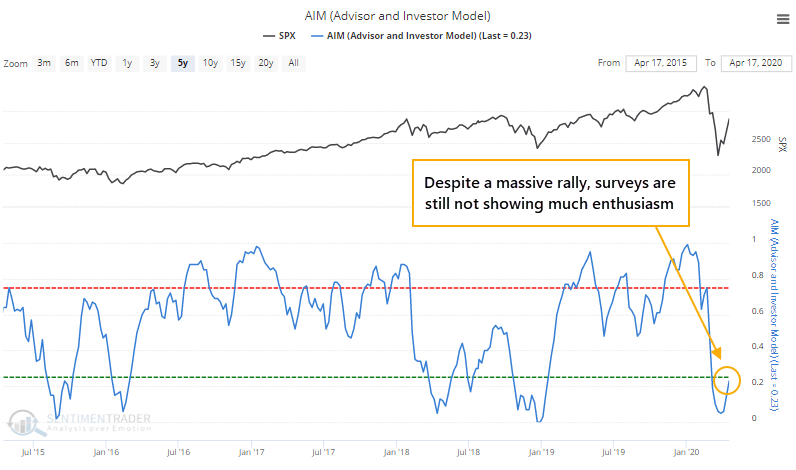 Shorter-term returns are similar apathetic responses to big rallies were poor because stocks have a tendency to back off a bit after big multi-week surges. But the positive momentum combined with apathetic sentiment led to consistently positive medium- to long-term gains, with all of them showing a gain a year later.

The post titled Surveys say that investors aren't buying this rally was originally published as on SentimenTrader.com on 2020-04-24.