Major indexes ended some notable streaks, which were nearing record lengths. The S&P 500 ended months without a 1% move by tripling that to the downside. The Russell 2000 and Nasdaq Composite both ended long periods above their 200-day moving averages.

It triggered signs of concern

As the day wore on, there were few places to hide. That usually means traders flock to inverse ETFs which profit on a market decline, and Wednesday saw record volume. It also sent implied volatility jumping for the 2nd time in a week, with an inversion of the Term Premium and large drop in the CNN Fear & Greed model. 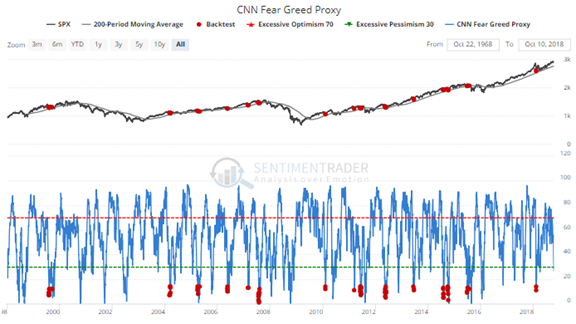 More than 90% of volume on the NYSE was focused on declining issues, and more than 90% of issues at 52-week highs or lows were lows. That kind of lopsided selling doesn’t happen often when the S&P 500 is still above its 200-day average. Since 1965, it has triggered on only 15 days.

Breadth momentum has been waning for a while, and now it’s getting extreme. The McClellan Oscillator dropped below -80 on Wednesday.

The post titled Streaks End As Concern Rises was originally published as on SentimenTrader.com on 2018-10-11.