The S&P 500’s total return over the past three months is well over 10%. The total return in an aggregate bond index is up over 3% at the same time, a large move for that market. 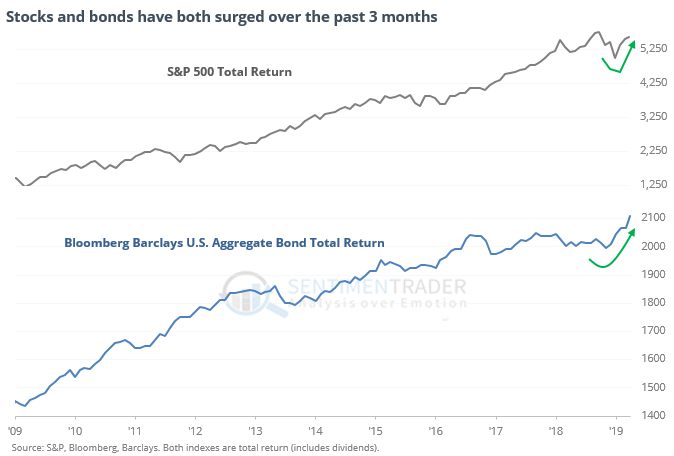 When both markets enjoyed such large total returns over a multi-month period, it tended to be a good sign for both. Far from being a worry, it led to significantly positive returns for stocks. Bonds, too, but it wasn’t quite as positive.

For the VIX, it was a mixed signal. Three times, it mostly rose over the next month, and three times it fell. The risk/reward was about even.

Bloomberg noted that the aggregate value of global corporate bonds has surged by more than $1.5 trillion in only the past three weeks. That’s about 3% of its value. Historically, a jump that large and to a new-high valuation has preceded further gains over the next three months 93% of the time.

An MSCI index of global equity total returns is about to have its 3-month average cross above its 12-month average for the first time in more than a quarter.

The post titled Stocks, Bonds Rise As Volatility Diverges was originally published as on SentimenTrader.com on 2019-03-29.