Bull markets sometimes suffer heavy selling following weekend news events, but even so, Monday was severe. It ranked in the bottom 3.5% of all bull market Monday’s since the inception of the popular SPY fund. 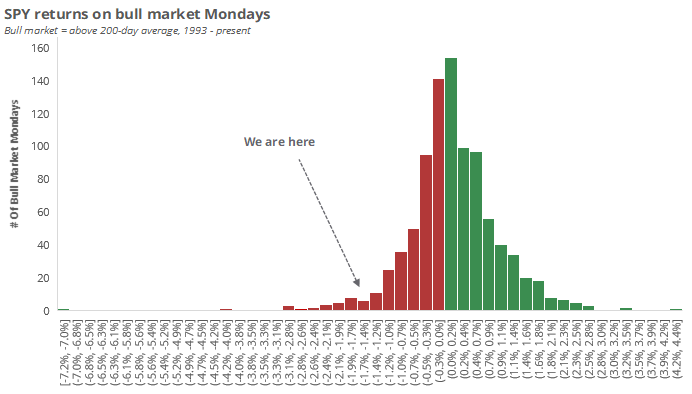 Other times it suffered large losses on bull market Mondays, SPY rallied over the next couple of weeks.

Not the pleasant kind of island

The tech-heavy Nasdaq 100 failed in its breakout attempt on Monday. That left an island formation in the index, after it broke out on March 9 and levitated above its prior high. The pattern is supposed to lead to weak returns, but it has not been a reliable reason to sell tech stocks.

Death crosses across the pond

The Stoxx Europe 600 index just triggered a Death Cross, a technical sell signal. That’s the 5th major eurozone index to suffer that signal in the past few weeks. The few other times they all triggered the signal in close proximity, stocks tended to rally hard.

The VIX gauge of volatility expectations jumped more than 20% on Monday yet remained relatively subdued below the 20 level.

The post titled SPY's Red Monday Leaves An Island And Death Crosses was originally published as on SentimenTrader.com on 2018-03-20.