S&P Returns When Days Before Thanksgiving Are Down

The S&P is headed for its second straight loss heading into the Thanksgiving holiday break.

Since 1962, there have been 10 times when the S&P suffered at least two straight down days heading into the break. Table 1 shows the returns if one bought and held the S&P for the 2 days immediately surrounding the holiday. 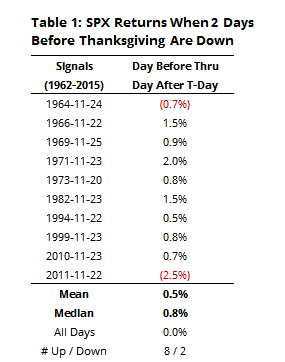 Of the 10 occurrences, 8 led to a positive return, and one of the losses was minor. For any holiday, the win rate was only 60%.

The post titled S&P Returns When Days Before Thanksgiving Are Down was originally published as on SentimenTrader.com on 2015-11-24.