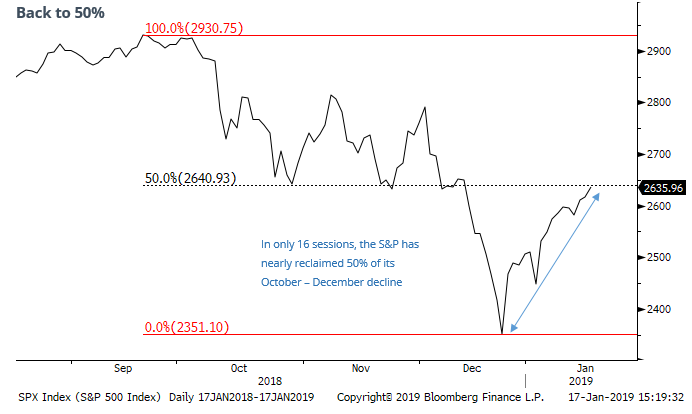 Following a loss of more than 15%, this retracement in only 16 sessions is the 3rd-fastest ever. On average, it took a median of 39 trading days to get to the 50% retracement level, but there was wide variability among them. Only 3 of them managed to do it in less than a month.

It’s not a magical threshold, however, since by the time the rally reached this stage, often buyers were exhausted and returns over the next two months were negative.

The S&P 500 Financial sector has rallied all but one day since the December 24 bottom. Seeing gains in 14 out of the last 15 sessions is a rare feat of buying pressure. 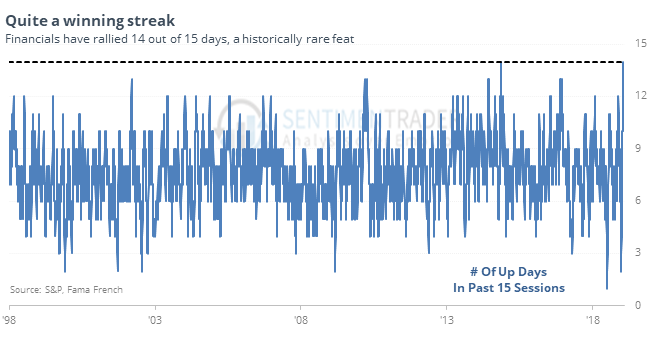 While there is some sense of excessive optimism in the short-term, in the medium-term these kinds of clusters have led to mostly good returns since 1926, especially after the only other time it happened in a downtrend.

The most-loved country at the moment is Canada. Its 10-day Optimism Index is at 80 for one of the few times in the history of the EWC fund. According to the Backtest Engine, this has happened only 3 times when trading below its 200-day average. One preceded a testing of the prior low, while the other two were kick-offs to major bullish moves as the optimistic thrust showed a massive change in character.