The latest Commitments of Traders report showed that "smart money" hedgers have finally started doing some buying in stocks.

Our 3-Year Min/Max Screen shows new multi-year highs in hedger positions in the Dow also the Hedgers Combo indicator. Their aggregate position in the major equity index contracts was more than $10 billion long as of Tuesday.

Over the past decade, it's been rare to see them this aggressive. Each instance led to dramatically higher prices for the S&P 500 according to our Backtest Engine. 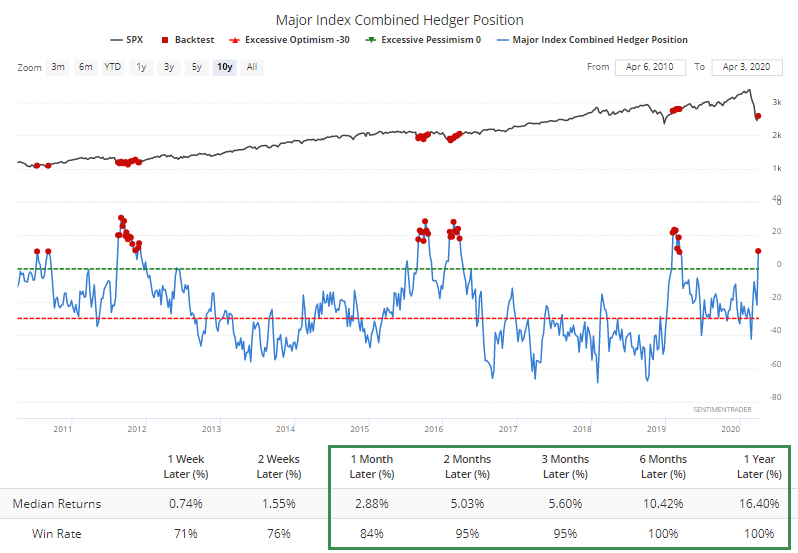 Granted, the past decade was dominated by bull market(s), and it's hard to make the case we're in the same environment. Going back further, this data didn't do as well. It seems as though something changed along with the 2008 financial crisis in how traders used these futures contracts. The same goes for evidence of corporate insider buying interest.

Oil's trying to get back to normal

Oil is reversing higher after one of the worst selloffs in history. This has pushed several indicators away from extremes. For example, the spread between near and far term oil futures has narrowed.

Oil's exact bottom wasn't necessarily in when it did so in the past. 2016 saw a V-shaped bottom, but 2008 saw oil chop sideways before staging a major rally. 1998 saw oil swing sideways for several months before rallying vigorously. Still, it was a good longer-term sign.

The post titled Smart money is buying in as the oil market tries to normalize was originally published as on SentimenTrader.com on 2020-04-06.