Smart Money Index: Everything You Should Know

The Smart Money Index, or Smart Money Flow Index, was popularized by Don Hayes in the 1990s and seeks to understand what the "smart money" is doing relative to the "dumb money". This indicator exists in different variations, but is based on the same concept:

How is this indicator calculated?

The Smart Money Flow Index can be calculated for any stock market index. The one that's frequently quoted in mainstream media is for the Dow Jones Industrial Average. But since the S&P 500 is a better representation of the overall U.S. stock market, we have calculated the SMI for the S&P 500. Here's what this indicator looks like: 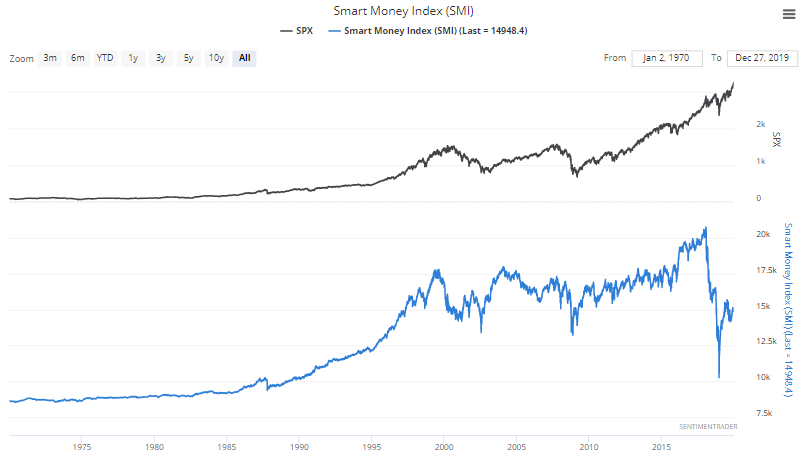 If you have a Bloomberg Terminal, you can find this indicator going back to the 1930s for the Dow Jones Industrial Average.

How to use the Smart Money Index

If the market moves in the same overall direction as the SMI, then the SMI is "confirming" the stock market's direction, which suggests that the trend will continue.

If the market trends in a different direction than the SMI, then the stock market will eventually mean-revert to the SMI’s direction. This means that...

How useful is the Smart Money Flow Index? Does it actually work, or is it just another one of those indicators' whose logic "sounds" really smart but in real-time is not much better than a 50/50 coin toss? 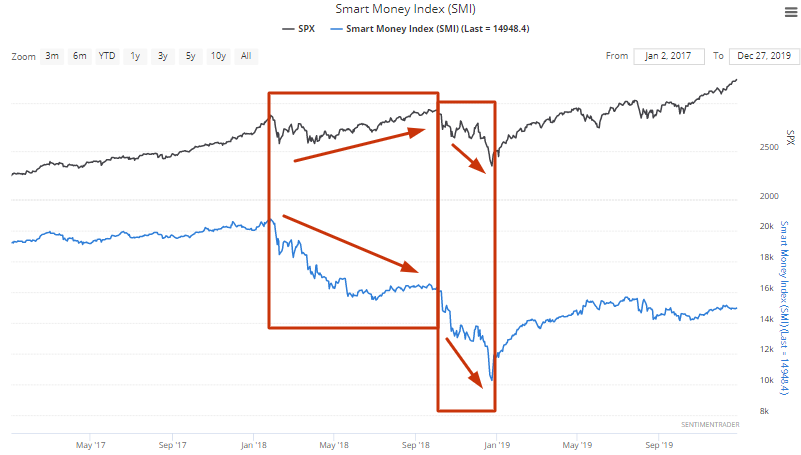 The U.S. stock market peaked in October 2007, but the Smart Money Index peaked more than 3.5 years earlier in February 2004. This was not a very useful warning sign for the U.S. stock market. When an indicator has been saying "BEARISH DIVERGENCE" for 3.5 years, it isn't very useful for market timing because it encourages the trader to turn bearish too early. Being too early isn't a whole lot different from being too late. 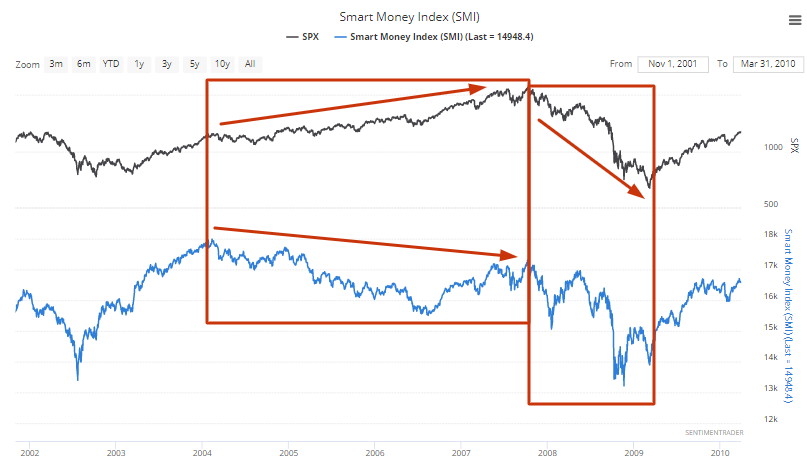 The U.S. stock market made a flat top from March - August 2000. Meanwhile, the Smart Money Index peaked in August 1999 and had collapsed by March 2000 (bearish divergence). Overall, this was an effective timing indicator for predicting the stock market's top. 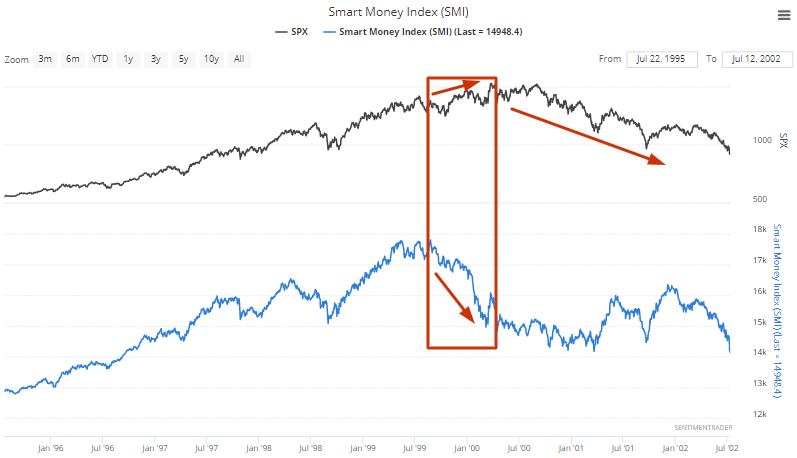 The U.S. stock market peaked in January 1973, and began a massive bear market that lasted until October 1974. The Smart Money Index's direction was very interesting during this period. 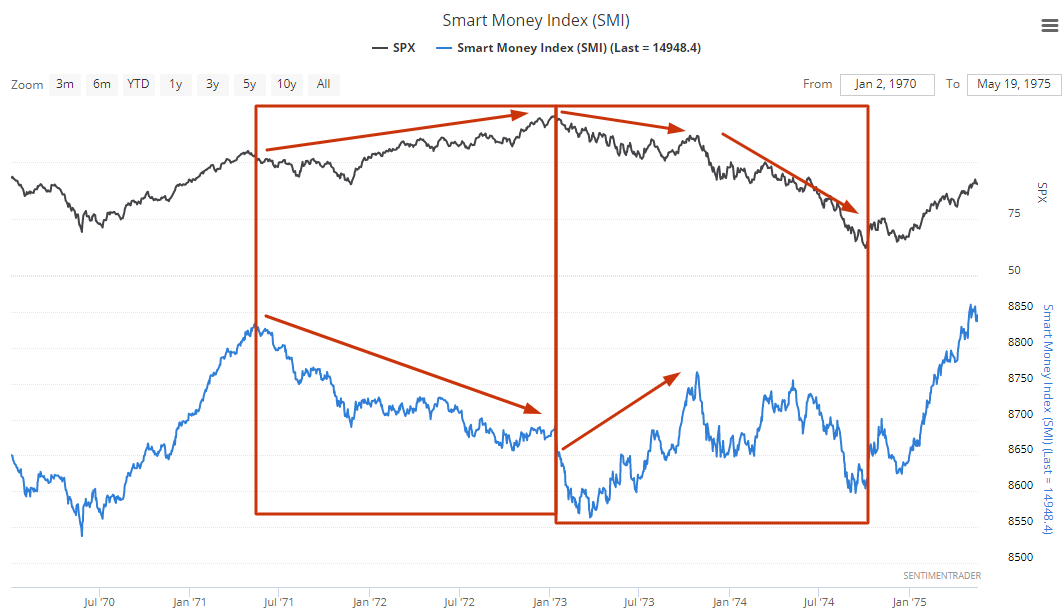 The Smart Money Index trended lower from the 2nd half of 1971 - 1972 as stocks trended higher. This was a decently useful "bearish divergence" since the U.S. stock market made a major peak in January 1973. But then something interesting happened. While the U.S. stock market trended downwards from January - October 1973, the Smart Money Index trended higher! This formed a "bullish divergence", which suggests that the stock market should rally soon.

Nothing could be further from the truth. Stocks CRASHED from October 1973 - October 1974. The bullish divergence failed. 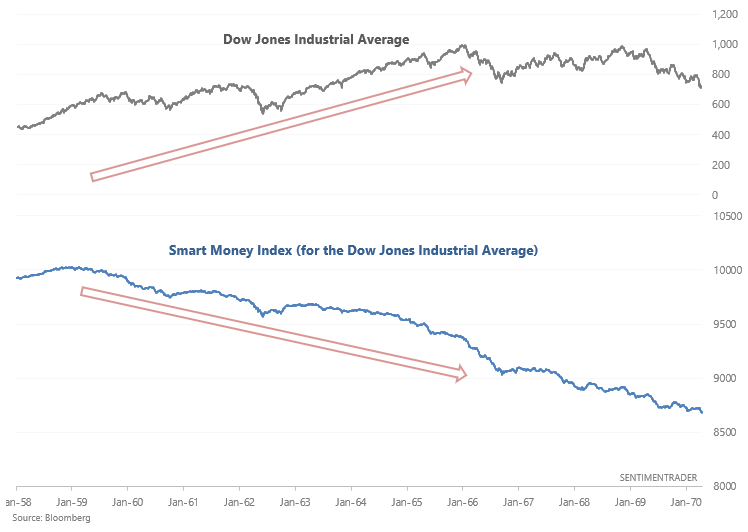 The Smart Money Index's historical track record is mixed, and it isn't clear that its track record is much different from a 50/50 coin toss. This is the case with many popular indicators which have a "smart sounding name" and "smart sounding logic", but when you add up the successes + failures aren't much better than a coin toss. This indicator did succeed in calling major market tops sometimes. But it also failed spectacularly at other times. Even a monkey throwing darts at a chart will be right 50% of the time. Focusing on the successes & sweeping failures under the rug doesn't do justice to actual traders and investors.

There are many indicators like this - popular indicators that have a mixed track record of success. Examples include MACD, stochastics, moving averages, etc. They sometimes work and sometimes fail. Popular indicators aren't always the best ones - they're just the most popular (i.e. the most marketed indicators).

Since I have a significant chunk of my net worth in my trading account (skin in the game) and this indicator does not have a great track record, I do not use this for my own trading.

What's wrong with the Smart Money Index? Why doesn't it work as it claims to?

It's hard to say exactly why an indicator works or doesn't work, but there are some clear flaws with this indicator's logic. For starters:

Anecdotally, I know many very successful traders who only execute trades at the daily open. But from a data-driven perspective, the last hour of each day (when the "smart money" supposedly trades, according to this indicator) always sees a spike in volume.

Over the past 15 years, more and more volume has occurred near the daily close due to the rising popularity of ETFs. ETFs often recalibrate their components and buy/sell each near the closing bell. And since everyone trades ETFs nowadays (mom and pop, professional traders, hedge funds, etc), it's hard to make the argument that the last hour of trading is frequented by only the "smart money".

In fact, the Wall Street Journal demonstrated that more than a quarter of daily volume in the S&P 500 stocks occur in the last half hour of each trading day (3:30 - 4 pm). The shift towards late-day trading has surged in recent years. 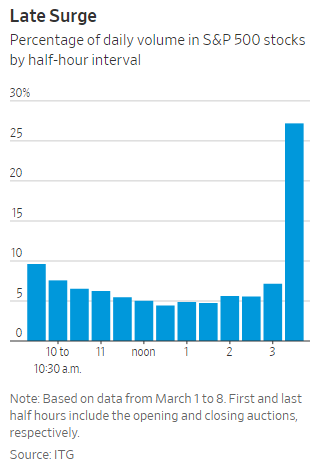 Moreover, this indicator doesn't really describe who the "smart money" is. Contrarians? Hedge funds? Institutional investors? If one thing's for sure, it's that the boundary between "smart money" and "dumb money" (in terms of whose performance is better) has blurred over the past 10 years. For example, the past 10 years have seen the average hedge fund consistently underperform "dumb" mom and pop who just buys and holds. 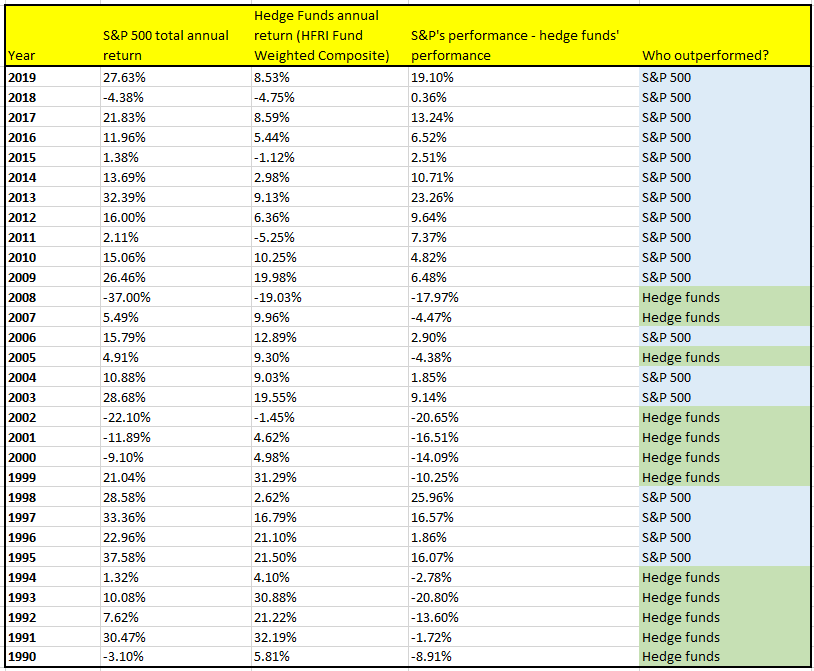 Where can you get regular updates for the Smart Money Index?

The post titled Smart Money Index: Everything You Should Know was originally published as on SentimenTrader.com on 2020-01-12.