With a flood of money combining with preternaturally calm conditions in the broader market, equity investors can't help themselves. Once again, buying interest was enough to push the S&P 500 to a record monthly close in May.

For the most widely-benchmarked index in the world, this was its 4th consecutive month with an all-time high. After the 18 other times it managed a feat like this since 1928, risk outweighed reward over the next six months only twice.

While they've settled back recently, part of the momentum has been due to a tremendous run in Small-Cap stocks, which just ended their 8th straight month with a positive total return, tied for the 5th-longest streak since 1926. 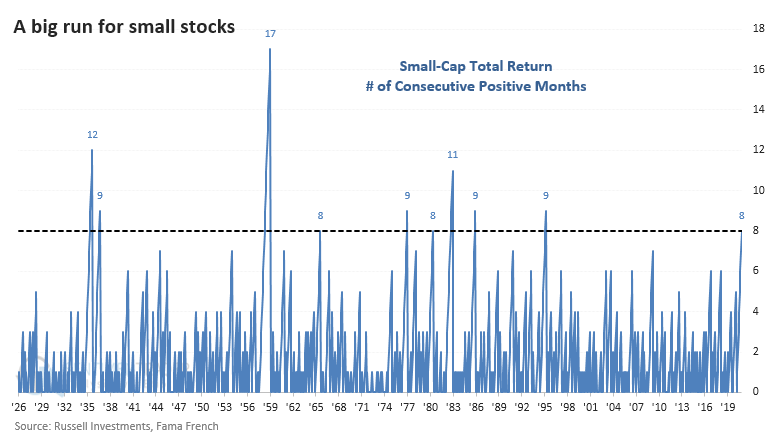 After other 8-month winning streaks, Small-Caps have tended to keep going, but there were some rough patches. A few times, they lost more than 10% over the next six months, though there was only one (very) large loss a year later.

Looking at the other end of the spectrum, the Dow Jones Industrial Average just celebrated its 125th anniversary by recording its 6th-largest gain over a 14-month stretch.

We've seen time and time again since last April that momentum does not die easily.

The post titled Small-Cap Stocks Haven't Run Like This Since 1995 was originally published as on SentimenTrader.com on 2021-06-02.