The GDP release relieved some investors by being better than feared. But forecasts show that growth this quarter is likely to be the lowest in 8 quarters. 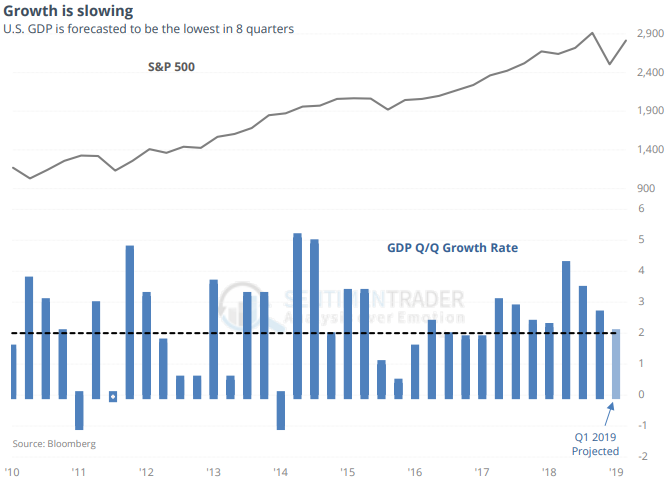 Like we’ve seen during past studies looking at economic or earnings recessions, the hype doesn’t often translate to forward returns. Looking at other times when stocks rallied into lower GDP growth, any worries seem over-hyped as future returns were fine.

In late December, the AIM Model of surveys collapsed to the most extreme level of pessimism possible. Now that stocks have rallied like they have after other times the model fell to 0%, it is back above 75%.

That’s a quick turnaround for what tends to be a slower-moving reflection of sentiment.

A nice couple of months

The momentum we’re seeing now is a good sign, and much is being made that this is the “best two months to start a year since…”. When both January and February showed a gain, the S&P did tend to continue rising over the next 10 months. But other two-month combinations showed much better returns than Jan-Feb, suggesting the calendar isn’t that big of a deal.

The S&P 500 isn’t the only market with a  good start to the year. It was the best ever for crude oil. Other good starts saw gains in early March almost every time and was mixed after that. Other markets struggled, especially emerging markets.

The AAII survey shows only 20% bears this week. Per the Backtest Engine, this tended to lead to poor returns in HYG.

The post titled Slowing GDP As Survey Sentiment Rebounds During A Nice Couple Of Months was originally published as on SentimenTrader.com on 2019-03-01.