Shorts have left the market

As stocks have enjoyed a relentless rally, those who sell stocks short hoping to buy them back later at a lower price have fled.

According to Business Insider, investors haven't been this bullish on the stock market in at least 15 years.

"In a note published on Thursday, Goldman Sachs highlighted that short interest in the S&P 500 has fallen to its lowest level in at least 15 years of its 16-year data history. The decline in short interest comes as stocks cruise to record highs after recovering from the fastest bear market on record...The median stock within the S&P 500 had outstanding short interest equating to just 1.8% of its market cap, Goldman said."

As a result, short interest among all NYSE securities has plunged. Short interest reflects the number of shares currently held short, needing to be bought back at a later date. After many years of rising short interest leading into the financial crisis, overall short interest levels have held relatively steady during the past decade. 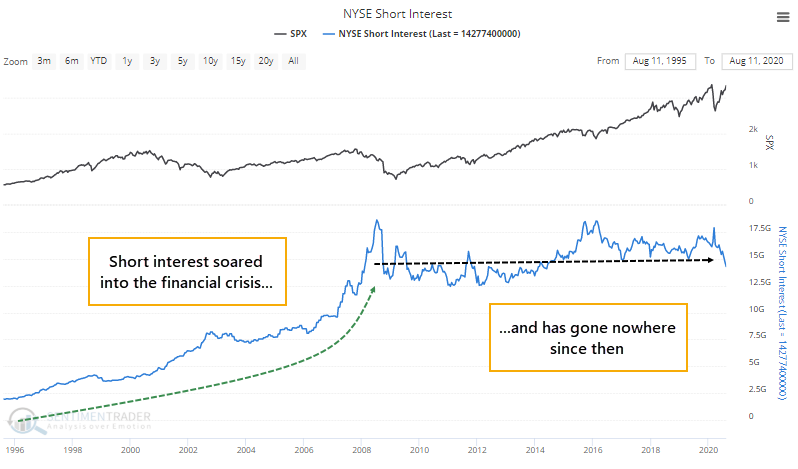 Among major sectors, only energy and health care are seeing short interest as a percentage of float on the upper ends of their ranges, according to Bloomberg calculations.

The post titled Shorts have left the market was originally published as on SentimenTrader.com on 2020-09-02.