Over the past year, stocks have rallied, and the dollar has collapses as the Fed raises rates. 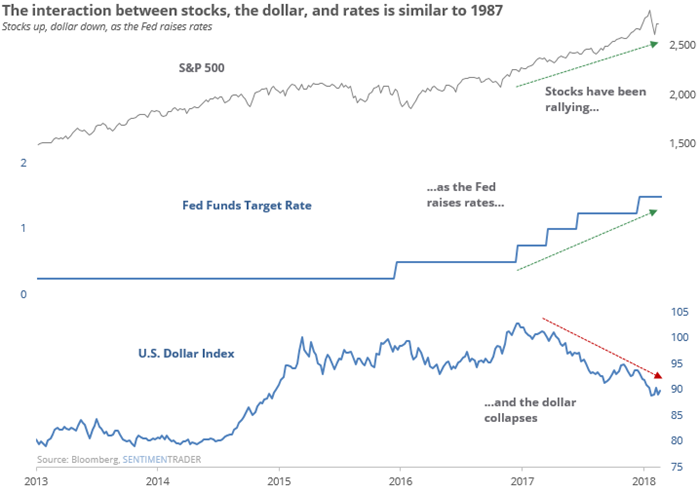 That is similar to 1987, but there were also other dates that didn’t lead to nearly such dramatic results. After similar setups, the best-performing asset was commodities.

After suffering a correction, the S&P 500 rallied back to its 50-day average.

It gyrated around its average but has not been able to close convincingly above it, and failed on Wednesday. Similar failures were a warning sign.

The popular Energy Select SPDR fund, XLE, erased its week-long bounce and closed at a new multi-month low. The index that the fund is based on has had 18 similar failed bounces since 1990. Surprisingly, it wasn’t that bad of a sign.

The most hated commodity contract is now coffee, with an Optimism Index below 20. Coffee has tended to trend, however, especially to the downside, with years of prices dripping lower.

The post titled Shades Of '87 In Stock/Dollar/Rate Moves As 50-Day Fails was originally published as on SentimenTrader.com on 2018-02-22.