Decades ago, Justin Mamis outlined an ideal Sentiment Cycle from greed to fear and back again. Quite a few cycles since then have adhered closely to the ideal.

According to a Twitter poll by the well-respected Helene Meisler, most people believe we're in the middle part of the Cycle. 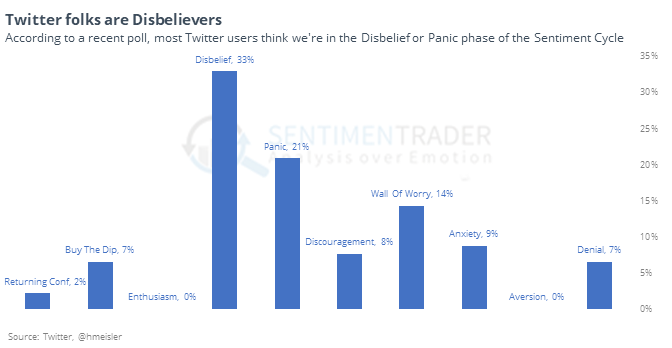 If we superimpose the S&P 500 price action from six months before the September peak through now, then it seems clear that we’re in the Panic phase of the decline, suggesting months of digestion ahead.

The S&P 500 has rallied more than 10% from its low, after falling into a correction. According to some definitions, this means the correction is over. Looking at all corrections since 1928, though, a 10% rally was not a good “all clear” sign, with too many failures over the next few months.

Five in a row

The rally keeps plugging along. SPY is now higher five days in a row, while still being more than 2% below its 200-day average. Over its history, it has done this 11 other times. Its most consistent performance was over the next 7 trading days, when it managed to add to its gains only 1 time (a 0.4% gain in October 2015). Its average return was -1.3%.

Utilities have struggled a bit, but rallied well on Thursday. Rydex mutual fund traders have piled in, recently putting more than $95 million into that fund. According to the Backtest Engine, that much money led to an average return of -0.7% over the next 3 months.

The post titled Sentiment Cycle; Ending The Correction was originally published as on SentimenTrader.com on 2019-01-11.