Seasonal Mean-Reversion Into The New Year

When people discuss seasonality, it is usually in terms of how often, and by how much, the general stock market rallies or declines during certain times of the year.

Those effects have mostly deteriorated over the years as they have become more well-known, but there are still pockets of consistency the further away we get from the broad stock market, such as in commodities or in individual stocks and sectors.

Alpha Architect recently highlighted a piece of academic research suggesting that seasonality was strongest in December and January for momentum names. Those with positive momentum did best in December, and those with the worst momentum did best in January. Investors bought winners at the end of the year and sold the losers to harvest tax benefits, then reversed it in the New Year.

Looking at our list of the most active ETFs for which we track sentiment, here are the best and worst performers so far in 2015: 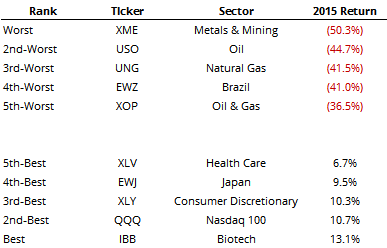 The effect dissipated the further out we look, as we'll discuss in the Daily Sentiment Report this evening. But for those looking to get in (or out) of shorter-term trades in the coming days, it pays to be aware of this seasonal mean-reversion effect.

The post titled Seasonal Mean-Reversion Into The New Year was originally published as on SentimenTrader.com on 2015-12-30.