The Russell 2000 rallied for almost two weeks, then failed on Friday and set a lower low. That triggered a classic failed bear market rally attempt. 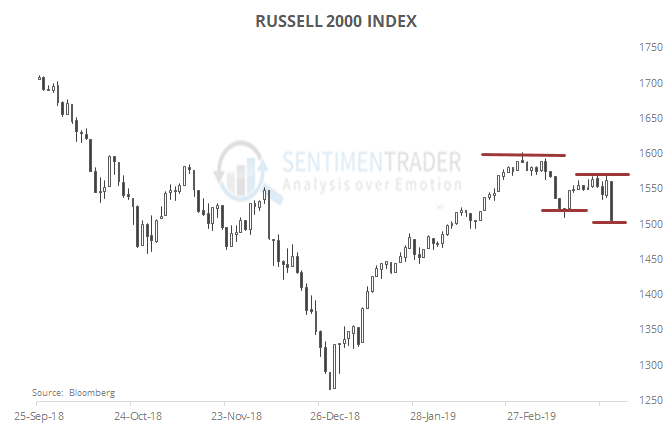 Historically, that hasn’t meant much in the shorter-term, but over the medium- to long-term, risk tended to be higher than reward. These were not slam-dunk sell signals, especially in the shorter-term. Up to a month later, the Russell’s average return was higher than a random return. But by two months later, it turned sour.

There is no shortage of warnings following the inversion of the yield curve last week. One of the direst is from Dr. John Hussman, with a signal suggesting an imminent decline.

Using his conditions, the signals were highly negative for stocks over the next 9-12 months, but the signal was not robust. Even a slight modification of the rules drastically changed some of the outcomes.

The smallest of options traders spent 39% of their volume buying speculative call options last week. According to the Backtest Engine, a reading that high since the financial crisis led to an average return of -2.3% in the S&P 500 over the next three months.

The post titled Russell's Failed Rally With A Yield Curve Warning was originally published as on SentimenTrader.com on 2019-03-26.