Risk is high and Dumb Money is confident...and they've been exactly right

The "dumb money" has been right, and they're not shy about letting everyone know about it.

It's a pejorative term, for sure, though we don't mean it that way. It's just shorthand for those investors who use a trend-following strategy. That can be perfectly valid, and they tend to be successful in riding the meat of a trend. Nothing wrong about that whatsoever. The issue arises when they become so confident that they establish their largest long positions AFTER markets have rallied hard, and their smallest after markets have declined.

Only because they tend to be their most exposed near market peaks and least near bottoms, is why they're classified as "dumb money."

The indicators we follow that track these investors reached a true extreme a few weeks ago. Because optimism has been high, and some of our studies have had a negative tilt, the Risk Level has been elevated. 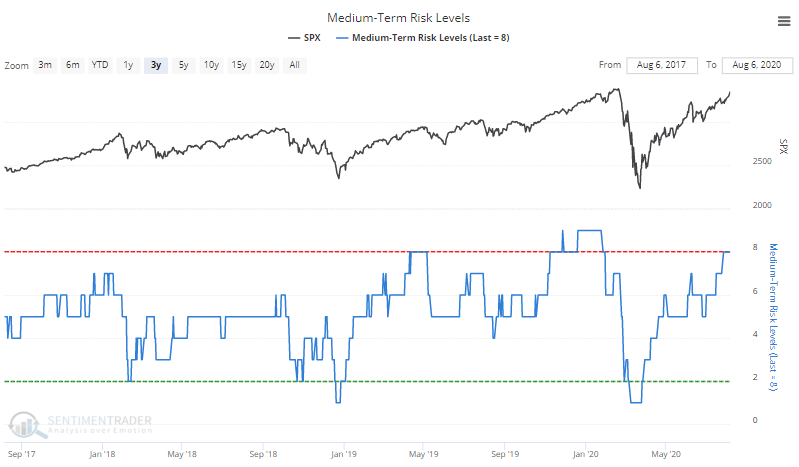 So far, this high risk has failed to lead to immediate weakness. There is a way to quantify failure called the Brier Score. It looks at predictions versus outcomes, with a higher Score meaning worse predictions.

We looked at this when our risk level seemed to be failing in February 2017 and again in December 2019. The conclusion is usually that by the time markets have levitated beyond the typical and people begin doubting the indicators, sentiment has shifted so far that it can't be sustained.

In recent days, the Brier Score for the Risk Level has moved above 85%, meaning that it has failed to lead to the predicted outcomes. It's not as high as some previous spikes but is rapidly getting there. We spend a lot of time looking at failures in our indicators and models. It's not navel-gazing or some kind of sick obsession with self-flagellation. But instead of pretending that they don't exist and everything is perfect, looking at failures can give excellent clues as to whether the market environment has changed.

The post titled Risk is high and Dumb Money is confident...and they've been exactly right was originally published as on SentimenTrader.com on 2020-08-10.