Traders have been shorting the heck out of volatility, and that's upsetting the contrarian in all of us. "Look out for a repeat of the VIX-mageddon!" from early last year, we're warned.

There are a lot of reasons to be suspect about the sustainability of the latest leg of this stock rally. Reasons that can be supported with historical evidence that similar conditions led to choppy markets, at best and major declines, at worst.

Not everything agrees - there are factors existing right now that have preceded good gains, too. It's all a matter of balance and weighing the evidence.

After the latest Commitments of Traders report, it seems like a lot of folks are placing this VIX data high up in the "bearish" column of the ledger. As Bloomberg notes,

Commonly known as the stock market fear gauge, aggressive bets against the VIX are, depending on your worldview, evidence of either confidence or complacency.

Do a Twitter or Google search for "vix short" and you'll get a bevy of opinions about how this is going to lead to a major volatility event and drop in stocks like it did the last time.

If we look at the actual historical record, it's not so clear. The chart below is from our Backtest Engine, which tests for any week in the past 10 years when large speculators were net short more than 25% of the open interest in VIX futures. 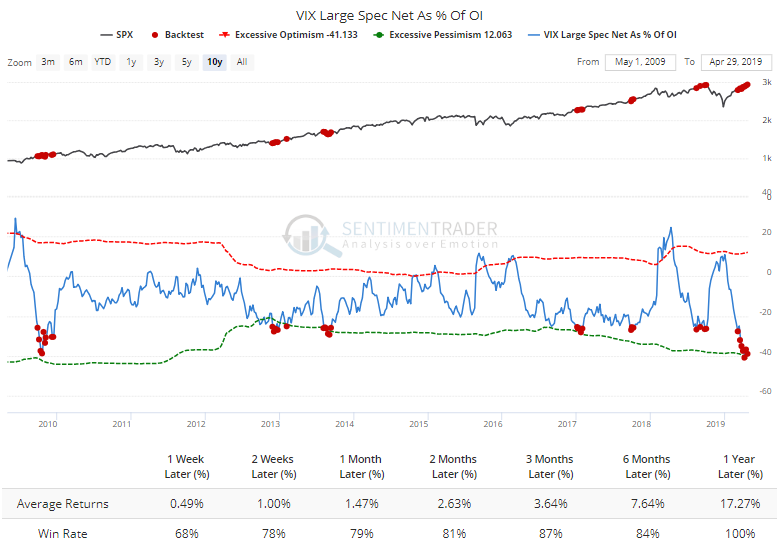 This happened right before the December decimation in stocks. So, bully to the bears. But prior to that, it did not. Quite the opposite. Across all weeks when speculators were short more than 25% of VIX open interest, the S&P 500's future returns were very good and consistently positive.

The 2018 instance is a caveat. It was also an outlier.

Volatility trading is a complex game, and there are a lot of very large, very sophisticated players that use VIX futures as part of a strategy we don't have a clue about. With ever-more ways to bet on the ebb and flow of price movements, it's nearly impossible to get an accurate read on what the sentiment is behind these positions.

There are far better ways to gauge sentiment than this.

The post titled Overplaying VIX-mageddon was originally published as on SentimenTrader.com on 2019-04-29.