Options Traders Are Going All In; Gold Is Almost The Most Overbought Ever

As the former manager of options trading for a large brokerage, I saw first-hand how customer interest in leveraged trading (margin and options) tended to wax and wane with rallies and declines in stocks. It’s what got me interested in sentiment as not only a reflection of, but rather driver of, future market returns.

That's why what we're seeing right now is concerning.

Options traders have been busy over the past couple of months, and increasingly aggressive. Speculative call option volume relative to total NYSE volume is nearing the all-time high from last fall. Not only that, the premiums they’re paying for these speculative lottery tickets are more than twice what they’re willing to pay for protective put options.

When we see some of the most leveraged traders in the market becoming confident and aggressive, it has usually been a good idea to expect the risk/reward to skew in the other direction.

Gold's nonstop surge over the past few days has pushed its 14-day Relative Strength Index (RSI) to the highest level in years. 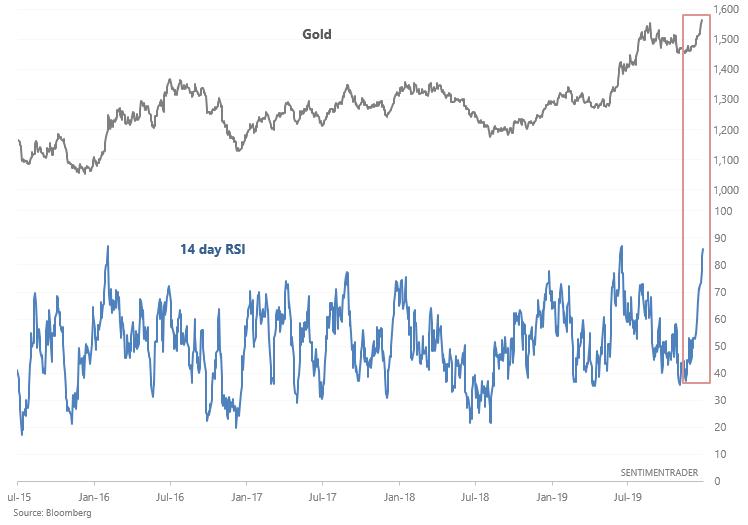 Such extreme momentum readings have only been matched 10 other times from 1975-present, and as one might expect it usually led to weakness over the next 1-2 weeks. 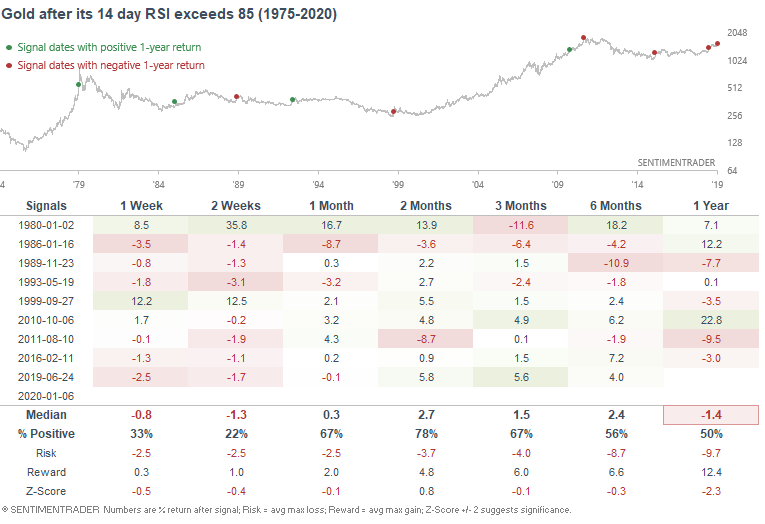 Over the next couple of weeks, gold managed a further gain only twice. Those two gains (in 1980 and 1999) were large, but ultimately erased as they triggered during blow-off conditions.

The post titled Options Traders Are Going All In; Gold Is Almost The Most Overbought Ever was originally published as on SentimenTrader.com on 2020-01-07.