Options traders are getting shaken out

The biggest story in equity markets last fall was the massive rise in speculative activity heading into late August and early September. A quick correction in some of the most targeted stocks wiped much of that away.

Then it started to pick up again in December, and by February hit new records. Again, a significant pullback in many of the highest-flying stocks helped to put a brake on some of that behavior.

Even with some major, broader indexes once again knocking on the door of record highs, speculative behavior continues to pull back a bit. Last week, the smallest of options traders spent 45% of their overall volume on buying speculative call options to open, nearly the lowest since last November. Meanwhile, they increased the number of protective put options they bought.

That means that our ROBO Put/Call Ratio has increased from its lows. ROBO stands for Retail-Only, Buy-to-Open and is one of the best ways to see who in the options market is doing precisely what. 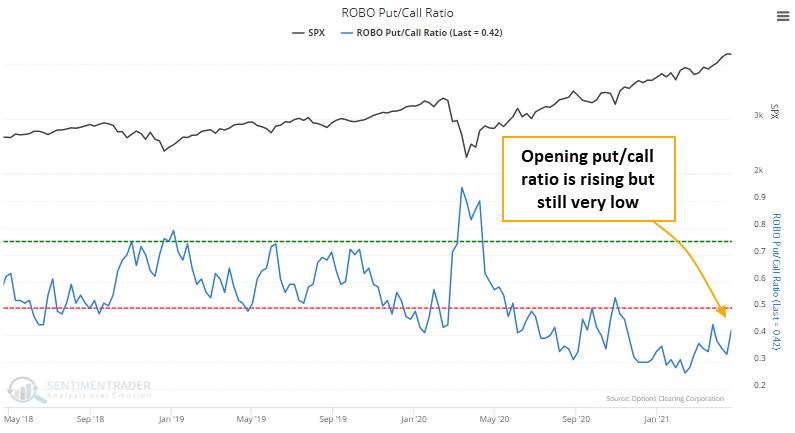 Saying that the ratio has increased is not saying a whole lot, though. Even with the rise in the ratio, it's still well below historical extremes.

It probably seems like a good sign that traders are becoming a tiny bit more skeptical even with rising prices, though the Backtest Engine shows mediocre returns any time the ROBO Put/Call Ratio rises above 0.4, with an average return over the next couple of weeks of-0.3%.

The post titled Options traders are getting shaken out was originally published as on SentimenTrader.com on 2021-04-27.