Only Black Monday And 9/11 Were Worse Than This

Signs of a “split” market started to trigger in mid-July and continued to accrue into the first days of August. This has been one of the tighter clusters of warning signs we’ve seen over the past 50 years.

By the time some of these trigger, stocks have already declined somewhat. By the warnings’ definitions, though, the decline can’t be too much, or occur too many days from a peak. So, they often cluster early in a decline’s first stage. The only dates that escaped any meaningful selling pressure were in November 1996 and November 2017. While seasonality is an iffy crutch, those two did have the gentle tailwind of triggering during a positive time of the year.

Swift, sharp pullbacks from a high tend to frighten investors since they’re not used to this kind of price action. The fears tend to be overreactions, though, with few morphing into more serious declines. Most of the time, stocks hit a new high before they suffer even a further 5% drop.

Out of the 16 times this happened, the S&P rebounded to a new high 10 times. It went the opposite direction and fell into a correction 6 times and fell another 5% beyond that (so 15% total decline) only once.

This has been one of the worst-ever reactions to a FOMC rate cut. Stocks have tumbled and bonds have rallied strongly in the 3 sessions since the Fed cut rates. 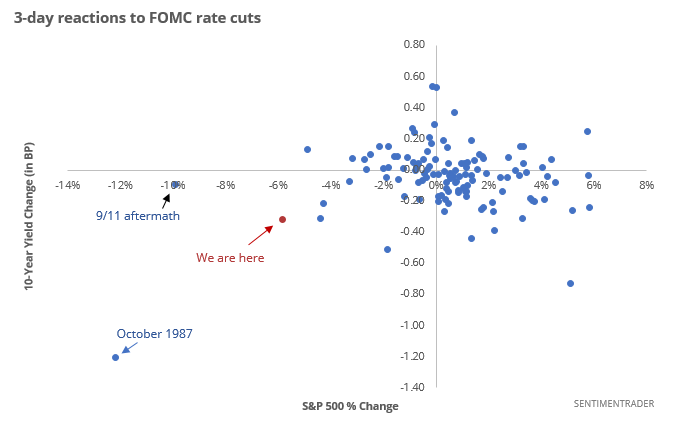 While that seems like it should be a bad omen, it has not been. It was in 2007, but that was about the only one that saw meaningful, and sustained, declines over most time frames.

The original VIX, which uses S&P 100 options, has more than doubled in less than two weeks. That has happened only 7 other times in the past 30 years, and led to a rebound in the S&P over the next two weeks all 7 times by an average of 1.3%. Only 3 of them led to uninterrupted upside, though.

The Stock/Bond Ratio has exceeded -2.9 while the S&P  500 is still above its 200-day average. Per the Backtest Engine, that has happened only once before, in early October 2014.

The post titled Only Black Monday And 9/11 Were Worse Than This was originally published as on SentimenTrader.com on 2019-08-06.