One of the worst days in market history

Many times over the years, we’ve seen that when more than half of a sector trades to a new low at the same time, it’s a consistent signal that investors have panicked.

It doesn’t happen very often in individual sectors, and it’s even less common when looking at all of them together. That’s what we saw on Monday, with over half of securities on the NYSE falling to a 52-week low.

Breadth statistics get less reliable the further back we go, especially on some individual days. Based on the data we have, such a spike in new lows occurred as stocks were tipping into bear markets in 1969 and 1973, though both of those also showed gains as stocks enjoyed a relief rebound over the next couple of months.

Other than those two, it only triggered during the final stages of meltdowns.

As plenty of market watchers on Twitter have noted, the Put/Call ratio spiked on Monday's stock market crash. Our De-Trended Equity Put/Call ratio is at a level that in the past, usually led to a S&P 500 rally over the next month.

The Total Put/Call ratio is now the most above its 6 month average ever: 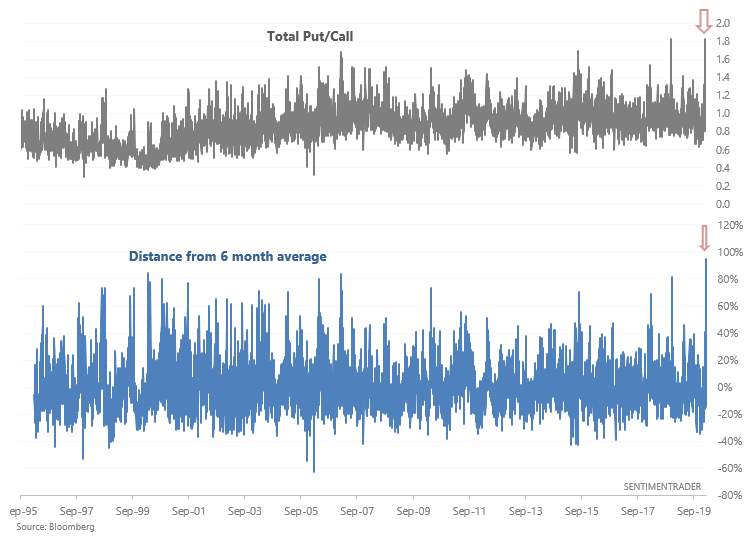 The only few comparable cases saw the S&P 500 rally over the next few weeks and months, even though 2 of these cases (April and October 2000) occurred at the start of a major bear market:

The post titled One of the worst days in market history was originally published as on SentimenTrader.com on 2020-03-10.