One of the most unique moments in market history

We spend a lot of time looking at precedents. It might be from a behavioral, price, breadth, or fundamental point of view, but much of it relies on some version of historical data. There is always the “this time is different” argument, and that’s the case with every moment in history. Our view is that if we look at historical behaviors, through enough lenses that we get a decent sample size from different perspectives, it can provide at least a small edge over time.

Precedents are getting hard to come by lately. Monday’s session was one of the books, especially when it comes down to the halt of trading.

That is a drastic step and says a lot about markets. The goalposts keep getting moved when it comes to the circuit breakers, but the only time they’d been triggered other than Monday was in 1997. So far, it's tracking that date pretty closely.

I've written a lot about the U.S. stock market's crash over the past 1-2 weeks, and I'd like to turn my attention to other stock markets around the world. 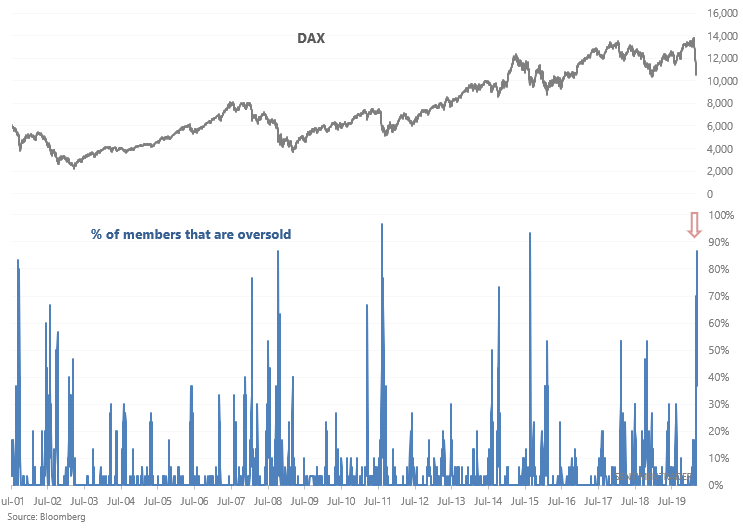 Such extreme selling has only been matched a few other times from 2001-present:

While the DAX could see more short term selling, this was usually followed by a double digit rally sometime over the next 2-6 months.

Things are even more extreme in France, Australia, and especially, Italy.

The post titled One of the most unique moments in market history was originally published as on SentimenTrader.com on 2020-03-11.