Once in a Blue Moon Sentiment and Breadth

Something truly rare is happening in financial markets right now. Both sentiment and breadth figures are at multi-year highs (if not multi-decade highs). When this happens, investors and traders split into 2 camps: those who think that stocks will crash (sentiment camp), and those who think that this is only the start of a great bull market (breadth & breakout camp).

Things are never so black and white. The 2 narratives can co-exist if we consider 2 different time frames.

While unimaginably high sentiment can and usually does lead to short term losses and market volatility, incredibly strong breadth is more of a long term bullish sign for stocks.

In other words, this may be the start of a bull market, BUT bull markets do not grow to the sky non-stop. There are normal ebbs and flows. The following charts will help you understand these 2 time frames right now.

As always, don't let someone else do your thinking for you. Do your own homework, think carefully, and ONLY take what I'm about to show you as input into your own trading and investment process. At the end of the day you are the steward for your own portfolio.

The following chart illustrates the % of our sentiment indicators that are showing excess optimism right now. This figure is at a 15 year high. 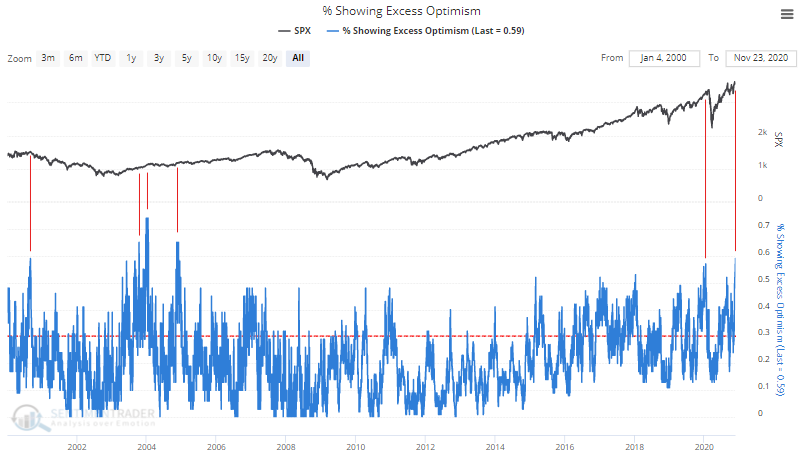 All but 1 of the historical cases led to months of volatility ahead, pullbacks, or major stock market crashes.

Will the U.S. stock market use months of volatility or a major pullback to wash out current extreme sentiment? Only time will tell. Recency bias encourages our minds to extrapolate the recent past into the future. After a fantastic year in 2020 (especially for everyone who started trading after March!), many traders are gunning for similar gains in the months and year ahead. But unfortunately, the near future is rarely just like the recent past, especially at extremes.

With that being said, bulls should be glad that breadth is very strong across the world. Rarely do major bear markets begin on the backs of incredibly strong breadth. Breadth needs to weaken before the possibility of a bear market should be considered more seriously. 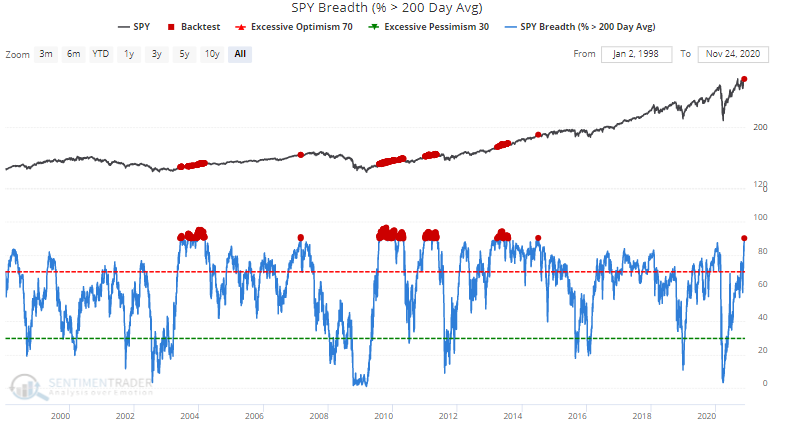 When this happened in the past, the S&P 500 almost always rallied further over the next year:

Traders should pay significant attention to the breakout and strong breadth in small caps. Whereas small caps lagged for much of this year, this sector rotation is good news for long term bulls.

Historical cases which saw a multi-year breakout on strong breadth usually saw more gains in the year ahead. Fighting the breakout did not pay, unless you were a nimble short term trader. 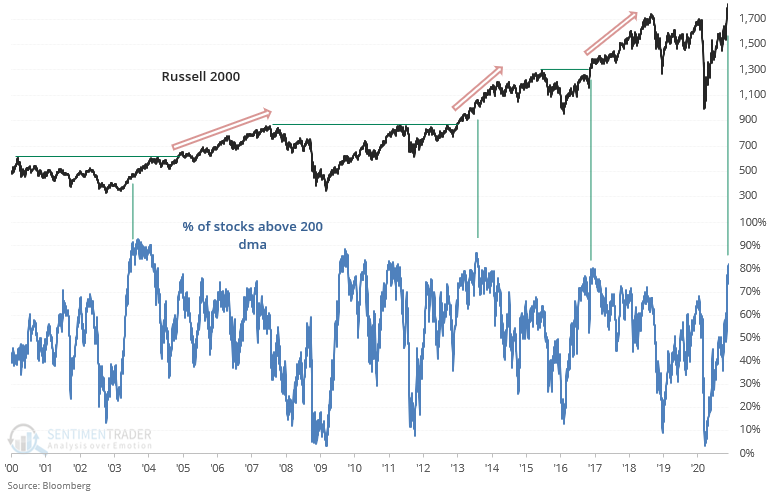 Value stocks are also (finally) having a field day: 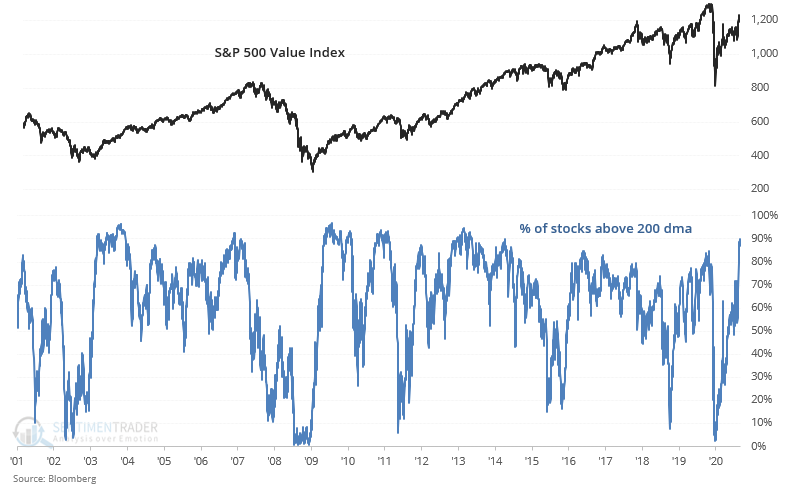 To the north in Canada, an increasing % of stocks are in a long term uptrend as the TSX approaches its previous all-time high: 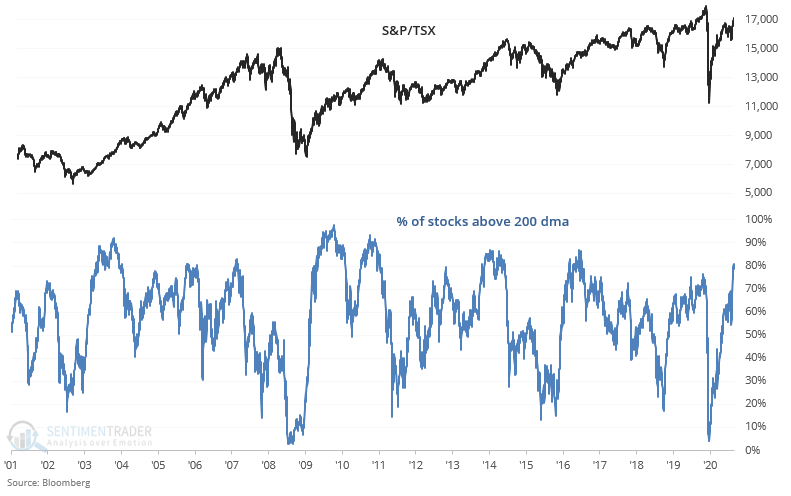 Breakouts and strong breadth are not only limited to the U.S.. Across the Pacific, Korean equities are breaking out: 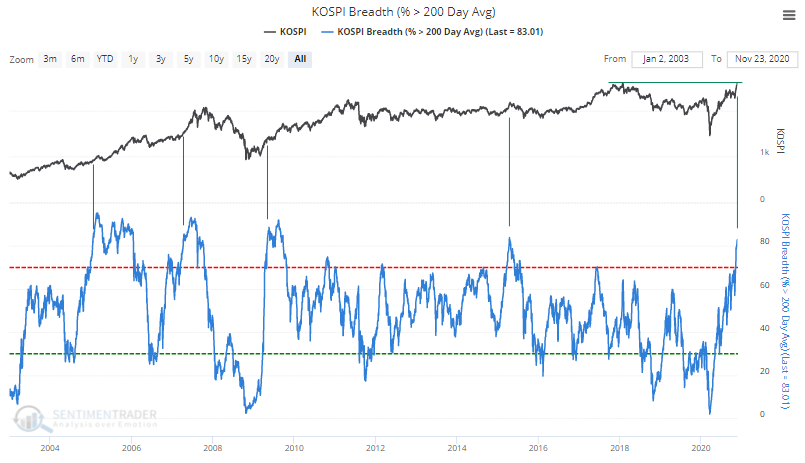 In Australia, the % of stocks above their 200 dma is at the highest level in a decade: 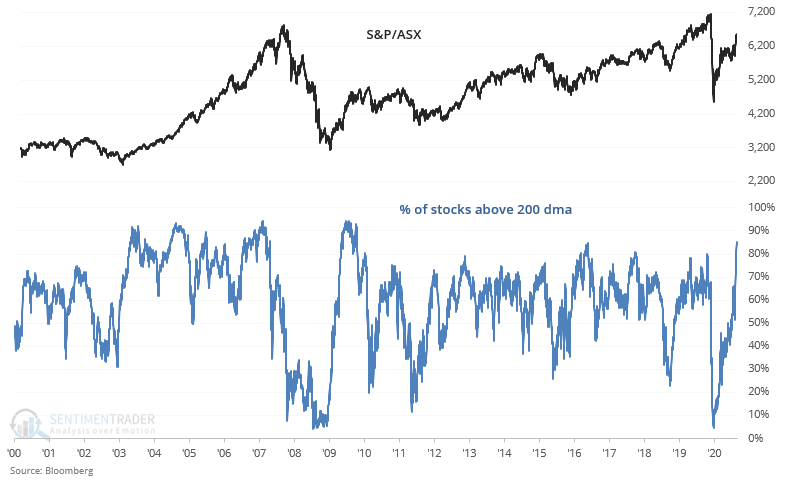 And in the UK we can see a similar story: 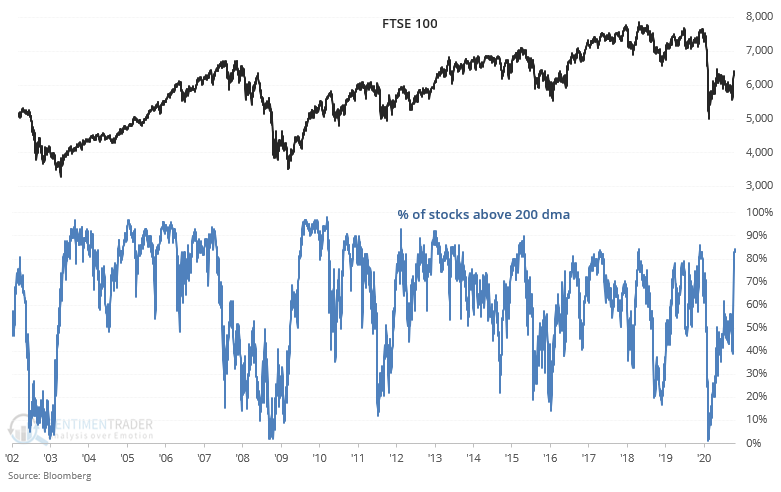 Overall, more and more indices and stocks around the world are breaking out. 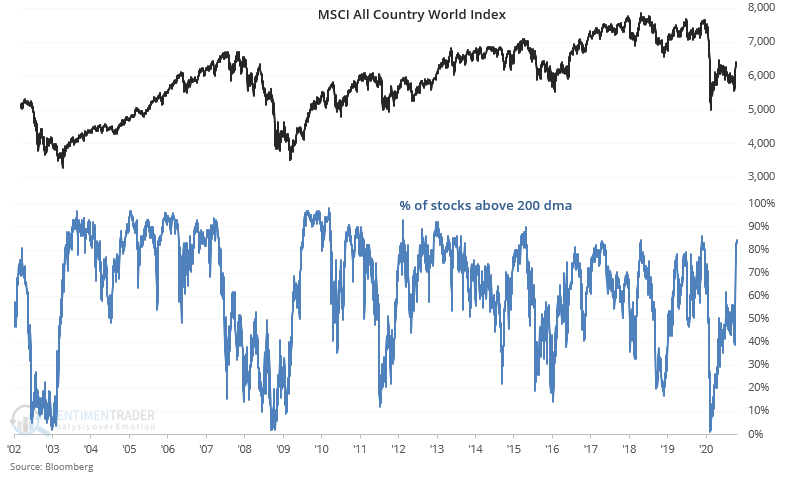 In general, it's not a good idea to fight the trend. The trend is your friend until the end, when it bends. Insane sentiment can bend the bull market in the short term, but not necessarily the long term.

The post titled Once in a Blue Moon Sentiment and Breadth was originally published as on SentimenTrader.com on 2020-11-24.