No Pessimism Even As Small-Caps Struggle

On Monday, the last of our core indicators that was showing a hint of pessimism dropped off. At the same time, 40% of them were showing optimism. The last two times that happened, the S&P formed a kind of rounded peak. 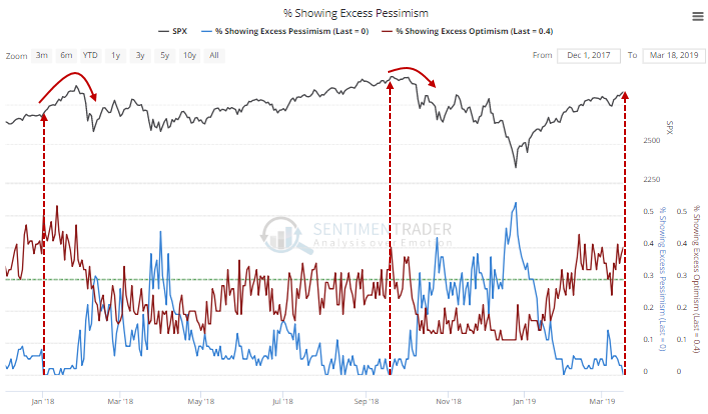 Since 1999, many of the positive returns were clustered in 2017, a year when trend-following momentum ruled everything. If we exclude that single year from the results, then it got quite a bit uglier with risk more than twice as high as reward over the next 2-3 months.

While the S&P 500 moved to a 100-day high, the small-cap Russell 2000 held more than 2% below its own 100-day high. That tends to concern investors who like to see everything in gear, but it wasn’t a good warning sign. More than anything, it led to better performance in the Russell versus the S&P over the next few months.
Spicy

ETFs focused on Indian stocks have had a remarkable month, up 12% or more since mid-February. The 10-day Optimism Index for PIN an INDA are now hitting extremes. According to the Backtest Engine, when the 10-day average for PIN has been this high, it added to its gains over the next week only 20% of the time.

Even though the Ibovespa index of Brazilian stocks has been hitting new highs, its McClellan Summation Index is struggling. Since 1999, when this has happened, the Ibovespa showed a positive return three months later only 30% of the time.

The post titled No Pessimism Even As Small-Caps Struggle was originally published as on SentimenTrader.com on 2019-03-20.