There is a new high in 52-week highs, as junk bond yields have plunged.

A new high in highs

When breaking out along with the S&P 500, this led to modestly positive medium-term returns, but the last two instances didn’t amount to much for the bulls, as the S&P pulled back over the next 1-2 months both times. Mostly, this was a good longer-term signal. Over the next year, the S&P showed only a single loss.

As Lisa Abramowicz mentioned on Twitter, junk bonds have rallied significantly over the past few months, pushing their yields to the lowest level in over a year. They're breaking out (or down) as stock indexes around the world do the same.

Since this figure usually trends higher before major periods of market and economic turbulence, cases in which this figure fell to a 1 year low were usually followed by stock market gains over the next 6-12 months, even though it often led to losses over the next 2 months. 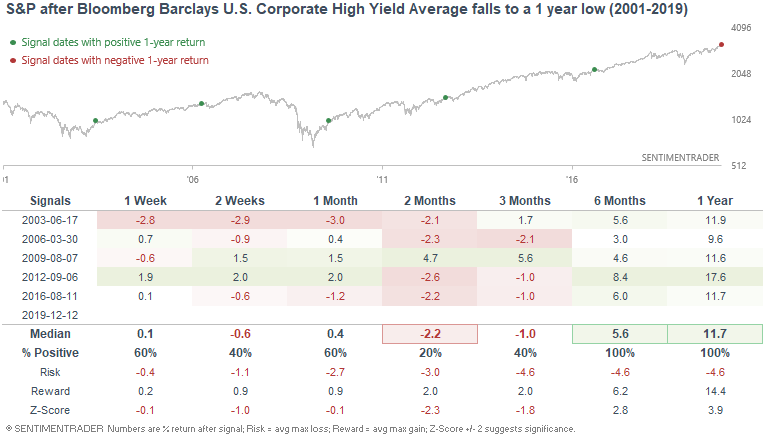 While traders would like to take this as an all-clear sign, it's worth noting those sketchy 2-3 month returns.

The post titled New Highs - And Junk Bonds - Break Out was originally published as on SentimenTrader.com on 2019-12-16.