A new day for the dollar

The U.S. dollar has closed above its long-term average for the first time in a year. Other times it ended a long streak in a downtrend, it continued to rally in the shorter-term. 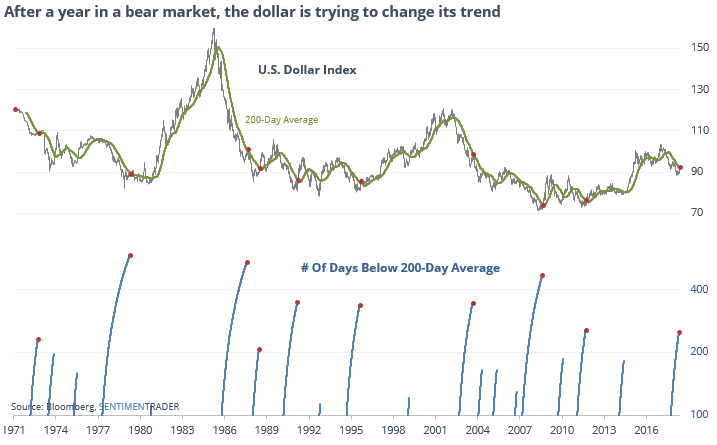 Its attempts at a new trend led to horrid returns in gold and oil, while Utilities and Health Care held up best.

Newsletter writers keep getting less optimistic about stocks, despite a steady market. Their optimism has hit a 52-week low in 3 out of 4 weeks, despite the S&P 500 holding well above its own low. The other times there was such a divergence, stocks rallied consistently over the next 6-12 months.

Staples are trading like death, and more of them slid to a 52-week low on Wednesday. More than 30% of stocks in the sector hit a new low, the most in nearly three years. According to the Backtest Engine, that has led to a rebound over the next month 81% of the time.

The only fund that has more pessimism than XLP over the past 10 days is VNM, the VanEck Vectors Vietnam ETF. Its 10-day average Optimism Index has dropped below 20 for the first time since 2015.

The post titled New Dollar Trend As Newsletters Keep Selling was originally published as on SentimenTrader.com on 2018-05-03.